Call us
Talk to a travel expert now
0877 40 50 00
Visit us
for a face-to-face chat
Find a store
Make an enquiry
Let a travel expert contact you
Get a quote
Print this page
Mauritius
Currency
Mauritian Rupee (MUR)
Official Language
Mauritian Creole, French, English

Mark Twain once said “… you gather the idea [from the citizens of Mauritius] that Mauritius was made first, and then heaven; and that heaven was copied after Mauritius”. The Island conjures up images of lush green vegetation surrounded by clear turquoise water; of blue skies and swaying palms. It’s a slice of paradise filled with luxury hotels and beckoning beach resorts. While some may choose Mauritius as a destination to relax and unwind, others choose it for the adventure. Whatever motivates you, the Island is sure to live up to your holiday expectations.

Many visitors gravitate towards resort areas that are popular for sunbathing, snorkelling or deep sea fishing, but if you’re looking for something uniquely Mauritian, be sure to visit the oldest botanical garden in the Southern Hemisphere. The Garden was built in 1767, and is home to giant water lilies and over 85 varieties of palms from Central America, Asia, Africa and the islands around the Indian Ocean. Black River Gorges National Park is another popular attraction. It’s located in the south-western part of Mauritius and was constructed in an effort to protect the island’s remaining rainforest and many species of wild animals and birds.

Sugarcane is the major cash crop on the island, and sugar cane fields occupy almost 80% of the arable land. Visit the old sugar mill museum, or indulge in a sugar scrub and honey massage spa treatment at Le Meridien Ile Maurice.

Where to Eat and Drink

Mauritius is home to a variety of cultures, each contributing unique tastes and flavours to the local cuisine. You’ll find anything from Michelin and celebrity chefs to fresh and tasty street food. Try chopped tropical fruit covered in chilly and sugar, or Chinese fried noodles with a Mauritian twist. Other street food classics include Dhal puri, a savoury crêpe stuffed with vegetable curry and pickles, and alouda, a dessert made with noodles.

In the evening you can enjoy the lively atmosphere of the nightclubs, pubs and restaurants on the west coast, or take a stroll on the beach in the moonlight.

Most of the resorts in Mauritius have been carefully developed along the coastline and preserve the island’s beauty and ecology. You’ll find wellknown chain hotels and luxury boutiques at the water’s edge, and plenty of hotels with a local flavour. Wherever you stay, be sure to explore the Island beyond the resort – that’s often where the hidden treasures lay.

The Le Caudan Waterfront in Port Louis stocks many major brands, and the Port Louis main bazaar is stocked with fresh fish and local vegetables, saris and handwoven baskets. Head to the craft market for a selection of tea, essential oils and jewellery. Craftsmen show off their skills at MAST, where the maritime history of Mauritius is displayed in their carefully constructed model ships. For a more strenuous credit card workout, Mauritius is also known for its diamonds…

Good to know in Mauritius

4 Ways to Hack the School Holidays in Zanzibar and Mauritius »

School holidays are on the way and you need ideas to avoid the dreaded 'I'm bored'. How can you treat the whole family to something really special without breaking the bank? Where can you go that’s fun for the folks and the kids (from tots to teens)? Well, we have just two words for you: Mauritius and Zanzibar. These two super family-friendly holiday hot spots have everything you need for an epic family holiday.1. more >
School holiday Mauritius Zanzibar

Hand-Picked Beach Resorts for an unforgettable holiday in Mauritius » 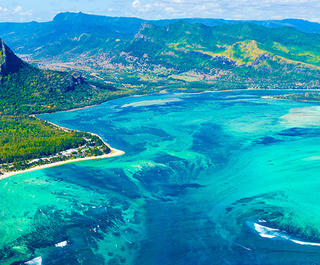 When you think about dream beach holiday escapes, Mauritius is what comes to mind. Glittering lagoons, ivory sand, fascinating Creole culture, delicious food and so much more. Make your Mauritius beach holiday dreams come true with these six hand-selected beach escapes.LUX* Grande GaubeSophisticated design and blissful relaxation meet at this luxurious five-star resort near the sleepy fishing village of Grand Gaube. more >
Beach Resorts Mauritius Flight Centre
Top Tours for an amazing holiday in Mauritius »
A sunset cruise on your honeymoon - in Mauritius »
See more travel experiences from our Blog »