No longer is Seville just a city “famous for oranges and women”, as English poet Lord Byron once so elegantly described it. Located in the south of the Iberian Peninsula, much of the city's notoriety comes from its association with flamenco and tapas, as well as an interesting political history being the largest city in the autonomous Andalusia region. A pretty city of whitewashed houses bright with bougainvillea, much of Seville's appeal lies in its extravagant Moorish architecture. Seville's streets are always buzzing, with plenty going on in the 2000 year-old plazas and cobbled streets.

One of the most charming cities of Spain, Seville’s rich history has left behind all number of things to see and do. Top of the list is the third largest cathedral in the world, Seville Cathedral, while close behind is the 104-metre high bell tower, Giralda Tower. Visitors will love the Renaissance Revival style of the Plaza de Espana, while the magical streets of Barrio of Santa Cruz will have you wanting to change your itinerary and stay longer. Across the river on the west bank you'll find Seville's bohemian district Trianna, where the atmosphere is very different at Maestranza, Seville's main bullfighting ring.

Eating out is a major part of Spanish lifestyle and especially so in Seville where most locals eat out at least once each day. This means there's no dearth of places to eat and drink in Seville – you'll find everything from paella and tortilla to sangria and of course plenty of tapas. For something cheap but definitely not nasty, roadside restaurants known as "ventas" always have great meals for good prices. For a spot of tapas some appetising areas are Alfalfa, Calles Mateas Gago and Santa Maria la Blanca, while you can dance the night away on the other side of the Guadalquivir River on Triana Island.

Visitors will find all manner of places to stay in Seville, with the greatest concentration speckled across the city centre between Calle Recarero and the Guadalquivir River. The Jewish Quarter in Barrio Santa Cruz has plenty of small budget hotels where you won’t be lacking in comfort, while there are even more options by the beach. For something extra special, Alfonso XIII is Seville's standout hotel. Though its history dates back almost 90 years, the grand dame of Seville hotels has only recently reopened after a complete renovation giving you the best of new and old.

Seville may not be synonymous with shopping, but on its streets you will find plenty of interesting things to fill your baggage allowance. First stop for shoppers is Calle Sierpes and the surrounding streets, where you'll find chain stores interspersed with local souvenir shops selling flamenco-style dresses and veils. To stock up on ceramics, head to Triana on the other side of the river, while antiques can be found at El Jueves, Seville's oldest antiques' market. For something more tomorrow than yesterday, head to the Alfalfa district where vintage stores stand side by side with contemporary art galleries and avant-garde fashion boutiques.

Skip the touristy flamenco shows and head to La Carboneria. Housed in a former coal storage warehouse, the makeshift space is where local aficionados converge to dance until the early hours. On the small stage you'll find ponytailed flamenco guitarists and dancers giving impromptu performances late into the night with barely a tourist in sight. Speaking of late at night, just remember too that locals in Seville tend to eat later than their fellow Spaniards. A true Sevillano starts with a pre-breakfast snack at 7am, followed by a more filling breakfast at 10am. A beer or a glass of dry sherry precedes the lunch break at 2pm and, despite snacking on plenty of tapas in between, a typical Sevillian dinner doesn't start until at least 9pm.

Highlights of Spain, Morocco and Portugal in 16 Days » 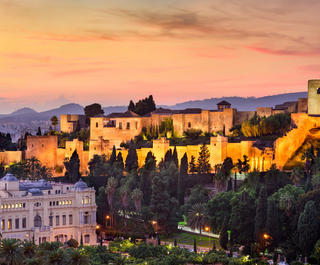 This Cost Saver Tour visits Spain, Morocco and Portugal. It winds its way from the bustling city of Madrid - bathed in Spanish sunshine, to the manic markets of Marrakesh, and the coastal city of Lisbon - routed deeply in the legends of ocean exploration. more >
Spain Morocco Portugal Granada Costa Del Sol Fez Marrakesh Seville Lisbon
See more travel experiences from our Blog »

Other Destinations in Spain