When planning a quick dash to France, the country's fifth city is one that unfortunately often gets overlooked in favour of its glamorous neighbour Cannes and, more recently Marseille. It's a shame because this ethnically diverse port city has plenty to offer visitors. From the beautiful view of the Promenade des Anglais to the city's unusual mix of grit and opulence, year-round sunshine is another factor that makes Nice a favourite tourist destination for those in the know. A city with universal appeal, everyone from romance-seeking couples to business people and backpackers will be able to find their own nook of Nice from which to celebrate life.

Once known as the winter capital of the world, Nice's legendary Promenade des Anglais have been attracting sun seekers for centuries. Curving around the Baie de Anges, it would be a waste just to visit Nice for sun and sand, or pebbles rather, as the city has far more to offer. If there's a walk that can match the one along the waterfront, it can be found at Vieux Nice (old town), home to a maze of colourful streets and alleys. To take in history and a view, climb the 90 step pathway up to Colline du Chateau, a ruined castle overlooking the city. Very much a museum city, the Museum of Modern and Contemporary Art, Marc Chagall Museum and the Matisse Museum are just three more of Nice's many cultural highlights.

Wining and dining is very much a part of the culture in Nice, and Vieux Nice is where you'll find the greatest concentration of the city's culinary offerings. With everything from the chic to the old world on offer, a good place to start is L'Effervesence, Nice's only champagne bar. Though a little hard to find, weekends and after hours is when to head to Le Staccato, Nice's leading jazz club. Another institution is La Merenda. Located near the bustling food market in Cour Saleya, it's a must for visit for anyone wanting to savour traditional Nicois cooking.

Nice's waterfront is lined with grand hotels, some of which are the noblest and most gorgeous in France. For the complete aristocratic experience, Hotel Negresco should be your only option and is where you'll find visiting heads of state occupying entire floors. An equally regal night of sleep can be had at Palais de la Mediterranee Vieux, while less bourgeois but just as charming is the Windsor Hotel. If your bedroom taste is for the ultra modern then check out Le Hi-Hotel, Nice's leading design hotel, or for an escape from the city centre, Villa Les Cygnes is a small locally run hotel with a big history of pleasing guests.

Visitors are often surprised at just how excellent Nice is as a shopping destination. Home to a similarly wide range of designer labels as other big cities in France, lesser known fashion brands can in particular make great purchases in Nice. Galleries Lafayette is where to find a large selection under one roof, while Nice's main shopping street, Jean Medecin Avenue, has an even wider selection of shops. To shop for fresh produce check out the promenade between the old town and the sea. Known locally as Cours Saleya, the market sells food produce every day of the week except Monday when it turns into a flea market.

Taking neighbouring Italy on at their own game, one of Nice's most famous local inventions is Socca. A Nicois take on pizza that's made with chickpea flour, you'll find restaurants all over the old town selling this tasty snack. One look at Chez Rene Socca's long queue and you'll realise where the local favourite is though. A great snack to mix with a pitcher of local wine, Lou Pilha Leva and Nissa Socca are two more popular socca specialists. Some local knowledge to remember when drinking and dining in Nice is that prices are different depending on where you sit at a venue. The bar is almost always the cheapest place while the terrace is usually the most expensive.

The Best summer destinations in Europe » 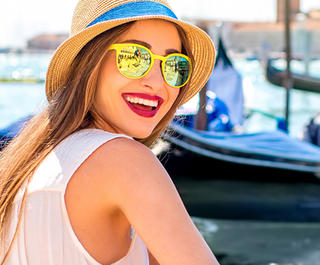 Wish you could swap the cold winter drizzle for some warm summer sizzle? Then pack your bags, leave cold SA behind and head to sunny Europe, where summer is in full swing! Whether you’re cruising along the coastline or adventuring on land, there are so many awesome cities to choose from this season. We’ve put together a few of the best to get you inspired.Amazing AmsterdamWhile Amsterdam is a hive of activity throughout the year, it really does come alive in summertime. more >
Amsterdam Nice Barcelona Berlin Venice
European summer travel »
See more travel experiences from our Blog »

Other Destinations in France