India – It really is incredible

The first night I share my bed with a hundred fireflies. At one stage, I am lit up like a Christmas tree. They dance silently about me, flickering and twinkling, tiny pinpricks of luminescence, like so many Tinkerbells, before gently settling on my bare arms and legs, glowing brightly.

Earlier this evening, as my guide DK and I track a tiger and her two cubs on the fringes of the forest, sighted here only last night, we see a chital – the spotted deer – favourite tiger prey and one of the world’s most beautiful deer species. 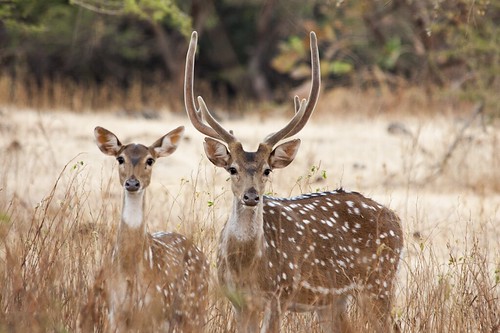 A male and female chital. Photo by Shaunak Modi.

A small herd of more-endangered deer, the aquatic barasingha, rescued from near extinction, sploshes past us as we wend our way past ghost trees – so named because of their pale greenish-grey trunks – and sacred strangler figs. Strange birdcalls pierce the clammy air.

The forest is not the thick impenetrable jungle of Nepal or Vietnam. Tarzan wouldn’t have felt particularly at home here. Rather it’s a tall forest of elegant sal, teak and mahua trees, a delicate fresh green because of the early rains, intermixed with meadows, nullahs (dry stream beds), rivers and wetlands.

Indian peafowl (peacocks to you and me) stalk the edges of streams and emit their strange discordant cries. A small troop of the common langur – the acrobats of the jungle – (a bit like our vervet monkey) clambers high in the branches and gazes down at us dispassionately. Known as “Hanuman” by the Hindu, this is the monkey god of myth and legend, now protected throughout this region. 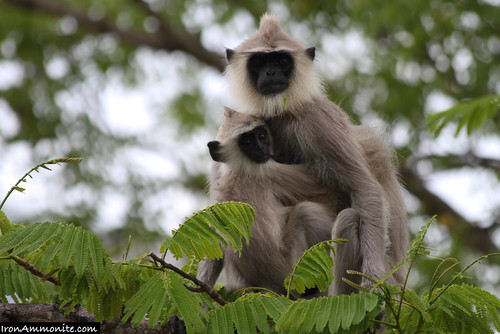 Around a bend we find a herd of gaur, the largest bovine in the world. Sometimes called the Indian bison, they are even taller and heavier than our African buffalo (but a lot more docile). 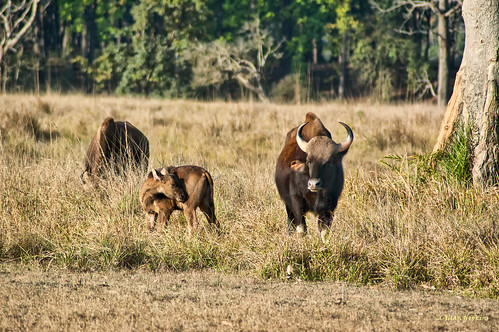 Of the 60 tigers that roam the park, we see not a whisker.

And then the monsoon arrives – a week earlier than is customary –with dramatic rolls of thunder. Sheets of rain pour down, stinging heavy drops scald our faces, and in no time our flimsy ponchos are no match for the torrential downpour. A wild pig slips and slides in the mud in front of us before skittering off into the forest.

Just another day in the life of a travel writer, I muse.

It’s taken me 12 hours to get to Kanha National Park, 1 945km2 of pristine wilderness deep in the Indian interior. I first take a plane from Delhi to Nagpur, then travel by road deeper and deeper into the interior of the state of Madhya Pradesh.

And so on to the tigers and a tented camp on the edge of the Banjaar River. On the opposite bank lies Kanha National Park. The nine tent suites are designed to fit in with their surroundings, and have a light footprint designed to protect the sensitive riverine environment.

Consisting of bamboo floors, canvas roofs and walls, and floor-to-window glass doors, they allow me to feel part of nature, not cocooned from it. A special feature is a “floating” veranda overlooking the river that I almost float off in the middle of the starless night while trying to persuade the fireflies to return to their natural habitat.

But now it’s time to brave the monsoon and to shoot a tiger (only with my camera, of course) and move on to Pench National Park.

Luckily, the monsoon hasn’t yet reached Pench – four hours’ drive east of Kanha. Although it’s referred to as a typical central Indian teak jungle, it seems to me that jungle is again an inappropriate word for a landscape of tall, slender trees, wide-open spaces and vast expanses of water, even though this is where Rudyard Kipling found his inspiration for Mowgli and The Jungle Book. 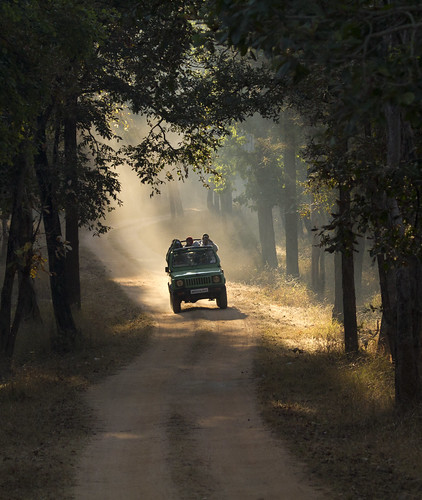 I stay in a jungle lodge in traditional colonial style where I’m to sleep in a carved wooden bed overlooked by a huge picture of an Indian princess. There’s a separate bathroom and dressing room with an open rooftop machan, (a platform erected in a tree for watching animals in wildlife reserves) where, if I choose to do battle with millions of flying insects, I can sleep out under a mosquito net. I’m positioned on the edge of a nullah that is alive with birdsong at dawn.

The next morning I have a rare sighting of the Indian wild dog, and then… there she is. One of my life’s defining moments. A huge tigress with two seven-month-old cubs the size of fully grown leopards gambolling around her as she dozes on a rocky bank, occasionally rolling on her back, all four paws in the air, and then mooching off to another nap spot. 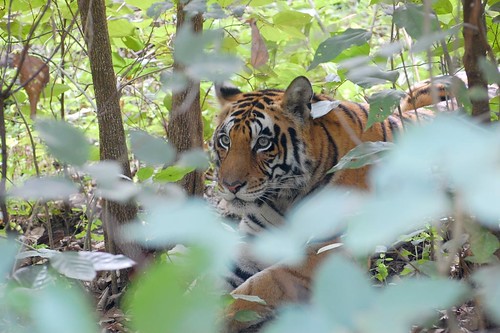 I don’t know if the late 18th-century English poet Blake had ever seen one of these magnificent animals when he wrote the iconic line, “Tiger, tiger, burning bright…” in his poem, but he certainly got it right. She blazed in orange, brown, gold and white among the greenery.

But how can she hunt when she is so fiercely bright I ask DK? He gently reminds me that animals only see in black and white. Take the colour out of your pictures when you get home, he says, and you won’t see that tiger against the jungle background. 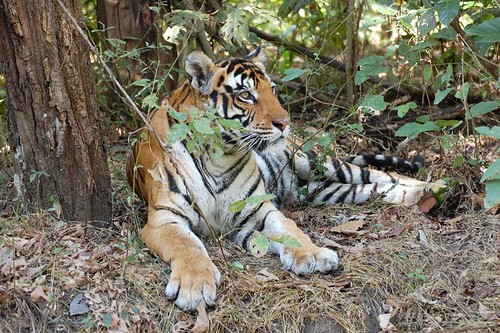 If you want to find tigers in India expect a long, tough journey that’s not for sissies. But when you get to your destination, the accommodation is fabulous, the people wonderful and the tigers are genuinely heart-stopping.

When I saw my tiger, tears came to my eyes. And I’m definitely not a sissy.