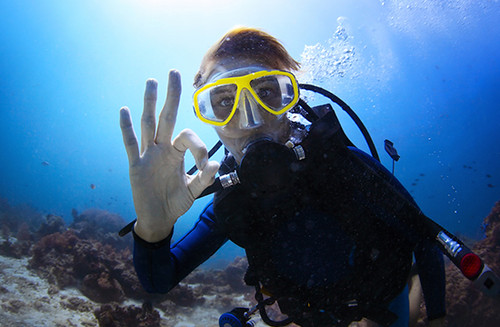 Formed thousands of years ago by fossilized sand dunes, Aliwal Shoal is roughly 3km in length and ranges in depth from less than 10 meters to more than 32 in its deepest parts.  A Marine Protected Area, the Shoal got its name from Captain Aliwal whose vessel nearly collided with the reef in 1849.    However, it wasn’t until the 1950’s that the area was first explored by scuba divers and has continued to gain popularity ever since.  Today, the smooth waters above Aliwal are busy with operators waiting for adrenaline filled divers to emerge from the depths.

“I have been working in Umkomaas for over 25 years.” says main skipper Basie Ackermann who owns the Aliwal Dive Centre.  A qualified lawyer, he left the profession to pursue his interest in diving and now manages a professional team of over 10 expertly trained land and sea staff.  Looking back, he certainly doesn’t miss his former career. “I get to see some amazing things working out here you miss behind a desk.” He says. Recounting some of his most treasured moments on the water, Basie recalls the excitement of watching a shark eat a turtle on the surface.  “It was an amazing thing to see.”  Together with his team of highly experienced dive masters, Basie skippers two launches to the shoal a day during peak times as well as runs PADI training courses. Basie’s colleague and PADI Dive Master Merel, relocated from Europe to work with the Centre and led Flight Centre on our dive.  “I love my job!” she said enthusiastically after giving an on-shore briefing before we headed out to sea.  “The reef is always changing and no two dives are ever the same so you never know what you will find.”

Once below the surface it was easy to see what draws Basie and Merel  back to the Shoal each day and why they are so passionate about diving.  From the throngs of brightly coloured fish darting effortlessly between fans of delicate corals, Aliwal is alive with spectacular marine life.   While we were a bit late in the season for sharks (sightings generally taper off in November for Hammerheads and Whale Sharks) we were lucky enough to see a large turtle, potato bass and the graceful passing of a Manta Ray.

Back in the boat after our dives it’s difficult not to wonder what interesting things you are missing down below.  The excitement of exploring that undersea world is certainly addictive.   But, just as the sun sets over the Indian Ocean, every holiday must come to an end.  Now that we’ve returned to Joburg, it is only a matter of time before the ocean calls again. We can’t wait for our next dive at Aliwal Shoal.

Africa
Uncovering idyllic Zanzibar
Africa
Big on Beer? Your Guide to Sampling the Best Brews in Gauteng
Africa
Top 6 tips for travelling responsibly in Africa
Africa
#Dare2Dream: 6 Weekend Getaways in South Africa
Africa
3 reasons why you’ll fall in love with SA travel
Africa
4 Ways to Hack the School Holidays in Zanzibar and Mauritius
Africa
Would you rather...? Couples Edition
Africa
The hottest local events in 2020!