You may well know about or have driven along Route 62, the fascinating winding, scenic journey through the mountains and historic passes of the Eastern Cape’s Klein Karoo. You almost certainly know that Port Elizabeth (once the “Windy City”, now the “Friendly City”) is one of South Africa’s favourite family holiday destinations, known for its gorgeous beaches. In fact, King’s Beach, Humewood Beach and Hobie Beach all have Blue Flag status – an international accolade awarded to over 4 000 beaches worldwide that excel in cleanliness and safety, and maintaining high environmental standards. 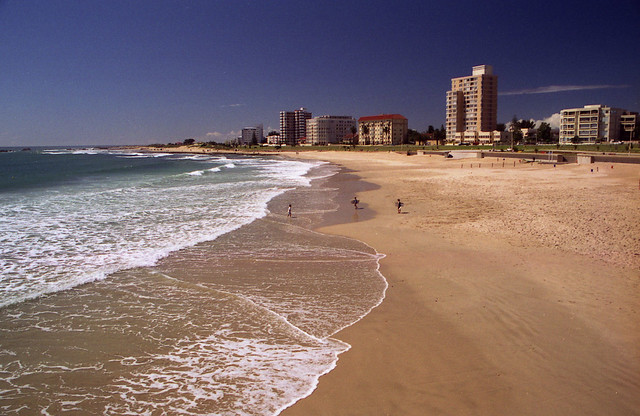 The PE beachfront. Photo by Brian Sneldon.
But have you heard about Port Elizabeth’s newest attraction – Route 67 – which is fast becoming a must-see destination for travellers to the Eastern Cape? Route 67 is an arts, culture and heritage route that celebrates Nelson Mandela’s 67 years devoted to South Africa’s freedom struggle. It’s an incredibly exciting visual trail, physically taking you from the 1820 Settler Monument, the campanile tower, to 1994 on a route of history and memory. 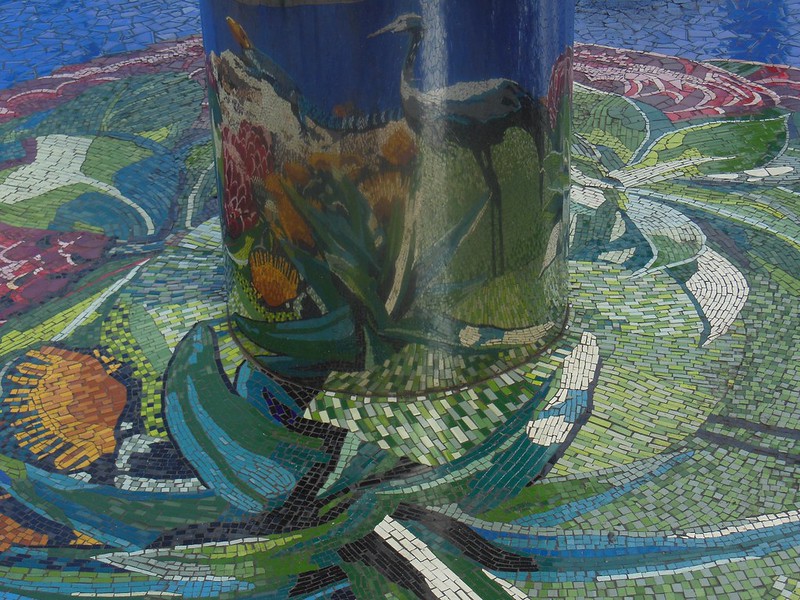 The mosaic covered Harmony Sculpture
Family-friendly (prams and wheelchairs are welcome) and visually stunning, the route can be walked in a couple of hours, or take a morning or afternoon and really immerse yourself in history, cutting-edge art and design, indigenous gardens, colourful mosaics, eye-catching murals, quirky sculptures and statues, and an amazing frieze showing the history of the Eastern Cape sculpted and set into a cast concrete curved beam. Where to start? Pick up a free route map from the Nelson Mandela Bay tourism office beside the historic lighthouse at the top of the hill in the Donkin Reserve (next to a stone pyramid built by a sorrowing husband to his dead wife). Go straight down to the 1923 campanile (bell) tower, with bells that peal out every quarter hour. You’ll now climb back up to the lighthouse and beyond, taking in all the sights along the route, well marked with wayfinding markers. 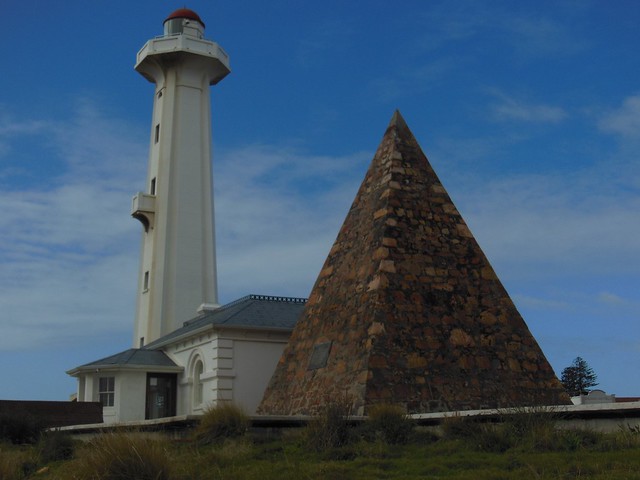 Hill Lighthouse and Donkin Memorial Pyramid
You’ll be moved emotionally by the campanile frieze with its poignant poem; walk over the Walk of Words, where words in different languages are beneath your feet; enjoy the brightly-coloured bus station mural and the adjacent mega-sized painted portraits of young people; marvel at the FishBone sculpture that visually anchors the old Jetty Street to Vuyisile Mini Square and encourages you to trace a historical path between the city and the harbour. 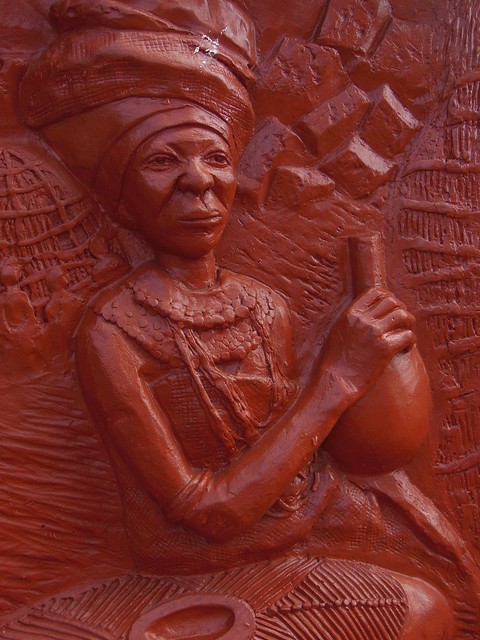 The Campanile frieze
Take a break at the Phoenix Hotel, by the tower sculpture halfway up the route on Chapel Street, and have a cold beer, a burger or a cooldrink while you enjoy the amazing collection of music and pop art memorabilia from the 50s, 60s and 70s. Up, up you go, at your own pace, up the mosaic stairs, past the amphitheatre wall, and after many, many more compelling sights, join the Election Queue – life-size laser-cut steel figures that wind their way around a wall evoking that memorable day in 1994 when South Africans from all walks of life voted in South Africa’s first democratic election. At the end of the line is a bigger-than-life-size cut-out metal figure of Nelson Mandela himself, leading the voters. 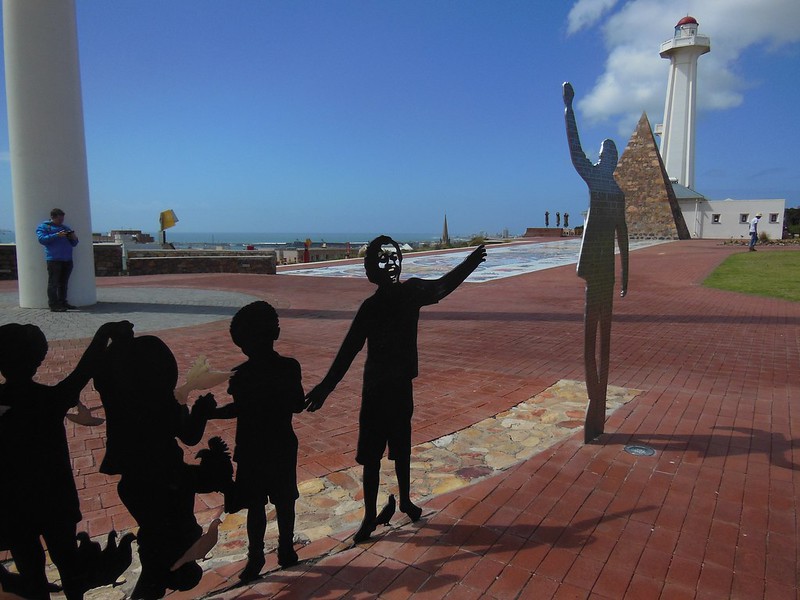 The Voting Line sculpture at Port Elizabeth's Donkin Reserve
At the top of the route, what is claimed to be the world’s biggest South African flag – weighing 15kg and the size of a soccer field – waves its South African colours atop a 60m-high flagpole. 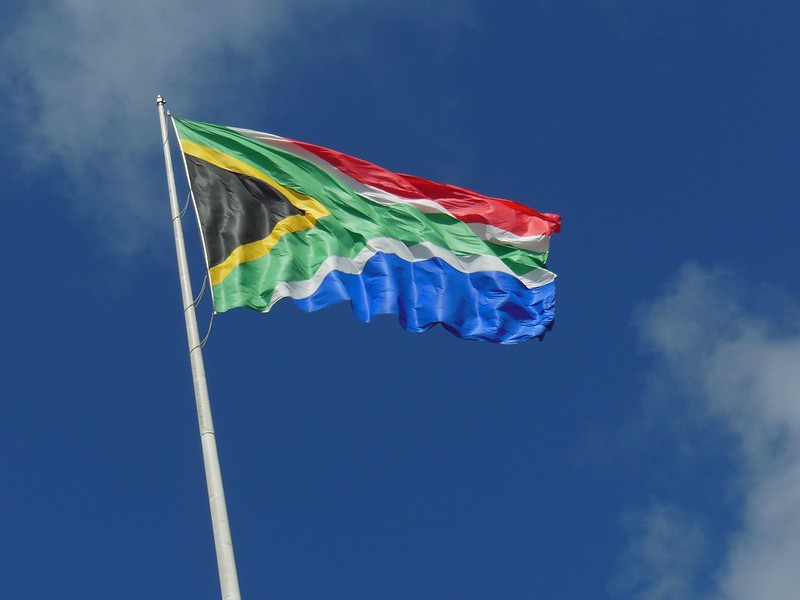 The South African flag
But there’s still more to come: an artwork called River Memory evoking the little stream that once trickled down to the sea; huge silver pipes that catch the sea breezes and make music; an old Victorian church; terraced cottages on Donkin Street; a round mosaic “welcome carpet” of quartz and beadwork; a stunning piece called Harmony in Nature that uses an old optical technique once employed by Leonardo da Vinci (you’ll find it hard to tear yourself away from this one); a children’s memorial; a linocut artwork by Shepherd Xego that takes you on an imaginary journey of the city; a market square honouring the composer of the South African national anthem … the list goes on. 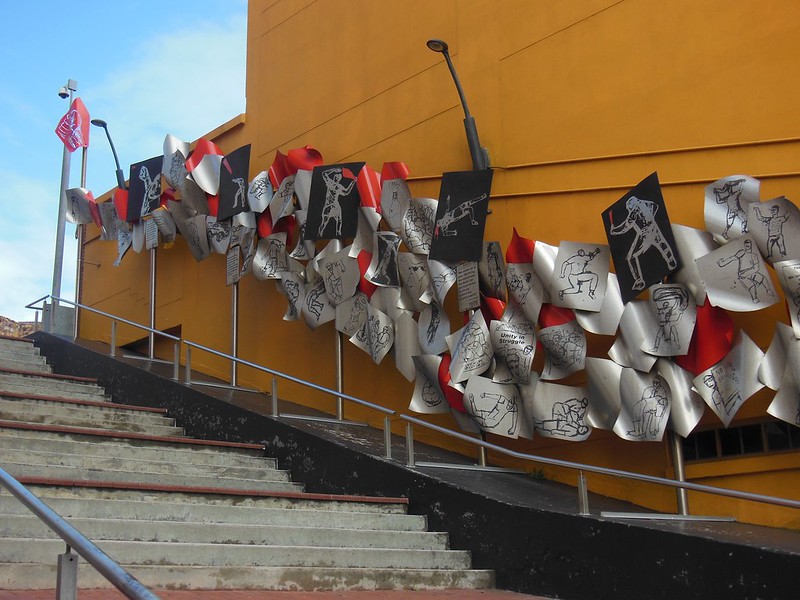 'Youth', commemorating the 1976 student uprising in Soweto
You can expect a total of 67 extraordinary stops along a journey that is a vibrant, unforgettable mix of heritage, visual arts, urban design and human creativity. Bravo Mandela Bay Development Agency and Nelson Mandela Bay Tourism! 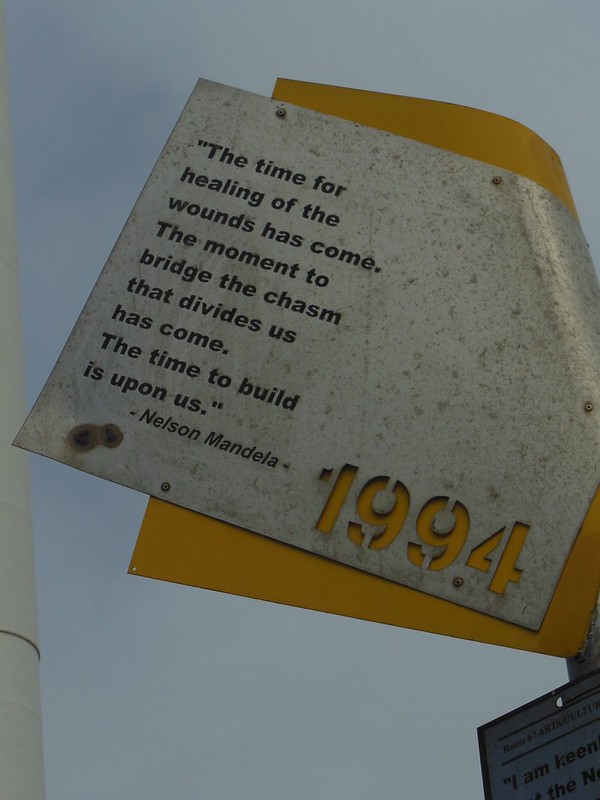 The End of journey...