Here at Flight Centre, we think there is no better way to celebrate global musical talent than by jetting off to a great festival with your best mates.  With so many amazing options for music lovers all over the globe we thought we would take a look at some of the best and  brightest.
Glastonbury (UK) – Held every June just two hours outside of London, Glastonbury is famed for attracting big names in the European music world. This awesome 2 day festival began in the 1970’s and initially charged only £1 entrance fee.  Today, the Pilton Farm grounds become blanketed with thousands of tents as festival goers enjoy music from every genre blasting from over 50 stages. 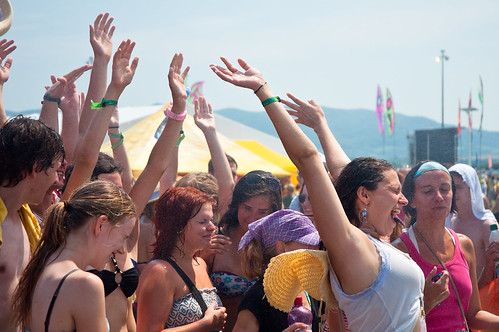 Coachella (USA) – Party with the stars in sunny Indio California for a 3 day weekend music and art festival held in mid-April.  Having gained so much popularity in recent years, the festival has had to expand to an additional weekend later in the month.  Featuring a wide range of artists from the Wu Tang Clan to Yeasayer, this festival is so fabulous it brings some of Hollywood’s big names, like Peirce Brosnan and Diane Kruger out of the hills and into the desert.

Big Day Out – (Australia) If you have ever wanted to party it up down under than Big Day Out is the ticket for you.  Held in 5 major cities across the country, this killer 2 day party is held in late January and has attracted the musical genius of such bands as the Red Hot Chili Peppers, Vampire Weekend and Animal Collective.  Aside from the amazing music, you can also check out some of the festivals outrageous entertainment which has included Mexican wrestling and an MTV hosted house party.

Rock In Rio - (Brazil) - The big daddy of all festivals, Rock in Rio originated in Brazil’s Rio de Janeiro in 1985 and has been the biggest music festival in the world attracting 1.5 million people.  Since the 1980’s the festival has since expanded to Lisbon, Portugal and Madrid Spain to host of the biggest names in rock and pop.  2012’s lineup included Linkin Park, Maroon 5 and Metallica to name a few.

While these are some of the biggest festivals in terms of attendance, there are loads of other amazing, bizarre and fun festivals ranging in size and style held all over the world at various times of year.  So, the next time you’re planning an overseas trip, do a little research beforehand and see if you can’t catch one of these great festivals.