Living in Hong Kong, the times of the games are pretty darn shoddy with most being in the early hours of the morning. But it hasn’t stopped anyone from getting involved in the action. The gamblers have gone crazy. The pubs are full. Everyone has chosen their team to support, including me seen as my national team didn’t qualify. It’s all rather exciting, whether you are a committed football fan or not. I am a loyal fan during the World Cup and sporadic at best at all other times. 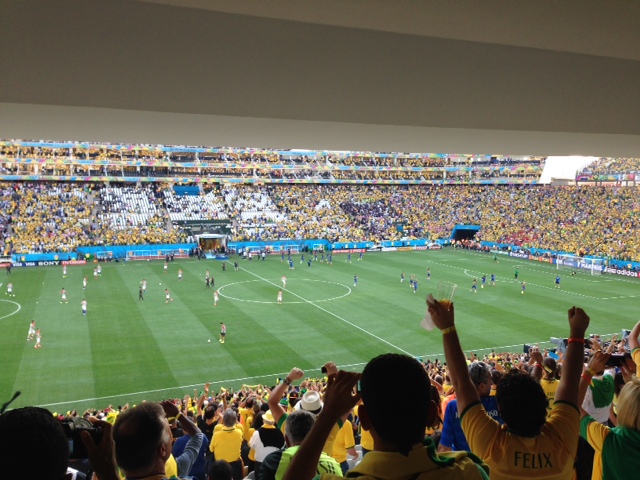 All this World Cup mania has made me look back on four years ago when little old South Africa was hosting the biggest sporting tournament in the world…and I was not there. In hindsight, I wish I had been. But I have some pretty interesting memories from that time anyway. I remember where I was for each of the Group A matches.

In June, 2010, I was living in England and caring for the elderly. On the day of the opening ceremony, I was just starting a new placement with a lovely woman, Mrs. Smith*, close to Gatwick Airport. We watched the opening ceremony and the opening game between Bafana Bafana and Mexico, complete with “Laduma” shouts, vuvuzela noise pollution and an emotional, sniffling me. Fortunately (and unfortunately), poor Mrs. Smith had short term memory loss and didn’t seem to mind watching at all. She just kept asking what sport was on the “telly” every few minutes. When I told her it was a rather important event happening in my country, she happily obliged. I managed to catch bits of the Uruguay game while staying with Mrs. Smith too in between taking immobile dogs for walks in the snow and cooking eggplant moussaka for two.

Probably my most memorable World Cup moment was on a trip to the south of France with a friend. I’d taken a break from care-giving. We arrived in Marseilles, dropped off our hired car, and managed to somehow miscalculate the times of the SA vs France match and missed it altogether. We arrived at the bar down the road from our hostel, South African flags flying, to congratulatory high fives from all the locals who were watching. Apparently, most of them had been supporting Bafana Bafana too on account of their team’s shocking performance and behaviour throughout the tournament. We joined a strange bunch of people and ended up at an underground boxing club/bar where we celebrated the win appropriately. We, or I, also suffered appropriate amounts the following day and on the (what seemed interminable) trip back to London.

Tonight, I’ll be heading to the pub down the road to watch the games with a few colleagues and friends; rather different from the last World Cup but just as memorable.

*Mrs. Smith’s name is not, in fact, Mrs. Smith, for obvious reasons.