Danang, central Vietnam, was the place I got a good tan along with a nice bout of heat stroke. I often felt on the point of collapse during our trip through Vietnam. We covered a lot of country in seven days and it was so very humid.

I: Incredible service you've experienced and where

Paris, France. The waiters were dressed in suits or tuxedos in the smallest of cafés and bistros. You paid a healthy sum for the good service, obviously, but it was most worth it.

J: Journey that took the longest

Travelling anywhere from South Africa is generally a lengthy experience. Travelling to my last home in Pohang, South Korea, I would have to catch three flights and a long bus ride door-to-door. This journey could take up to 30 hours or more.  I also remember a hair-raising, overnight bus ride from Siem Reap, Cambodia, to Ho Chi Minh, Vietnam. It took close on 17 hours. The bus was in supreme condition, as you can imagine. I think we got the last three tickets on the bus and were squashed into the very back seats. Surprisingly, all three of us slept very well despite the tar/gravel roads, pit stops in nowhere land, across-the-border bag carrying and no space. Upon our arrival, we were very ready for a long shower, some good food and lots of bababa (333) beer. 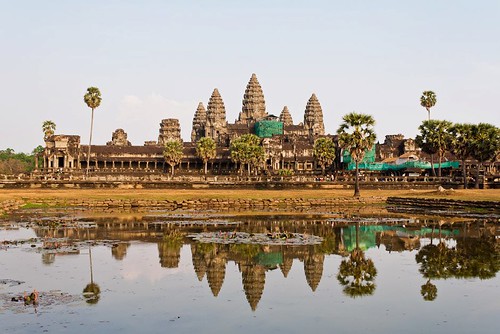 K: Keepsake from your travels

I try to keep a basic scrapbook and journal when I travel anywhere. As difficult as it is to do at the time, it brings great joy when looking back some time later. Memories are absolutely priceless.

L: Let-down sight, why and where

Mona Lisa, Louvre Museum, Paris. Even though people warned me not to get my hopes up, I was still most excited to it. The Mona Lisa is quite a small painting, covered and protected by several layers of glass, and is impossible to photograph without having several other tourists in the picture.

M: Moment where you fell in love with travel

I had some glorious and horrendous experiences while living in England. For the first six months, I hardly had any money; it all went to rent, food and transport (living in London is ridiculously expensive). In the October though, a friend and I arranged three days off work. We flew to Munich, Germany, for the famous Oktoberfest beer festival. We took only hand luggage with us, camped in a massive camp site with thousands of other like-minded people, showered for a minute a day, and drank the best beer in the world. One day of the trip, I was standing in the Hofbrau beer tent surrounded by people from around the world; Italy, South Africa, Brazil, Australia, Poland, Scotland and the USA. We were singing a German folk song. I had a stein in my hand and a smile in my heart.