A: Age you went on your first international trip

I believe I was just four years old when my stepdad, mom, baby brother and I moved to Simunye, Swaziland for two years. It was a magical two years of real life, real people and freedom. A few years later, my stepdad commuted to and from Durban, South Africa, for a while in my early high school years. He was working near Maputo, Mozambique. It was incredibly difficult for him but wonderful for us to visit him during the school holidays.  I first left the African continent in my last year of school, for Mauritius, and French tour. I had to take a loan from my mom and stepdad for the trip and only finished paying them back last year, some seven years later.

B: Best foreign beer you've had and where

This is easy. It was a Lowenbrau draft beer in the tent of the same name at the Oktoberfest in Munich, Germany. It was the first tent we stepped into, I was wearing a ridiculous hat on my head, surrounded by people from the world over singing in German, amazing friends by my side and a beautiful litre of beer in my hand. It doesn't get much better! We returned to Lowenbrau several times on that trip.

A close second is a Tiger beer from Cambodia; mainly because it was after a very hot, sticky day of travelling. Ice-cold glass, cold beer, great company, fantastic food and a Tiger beer = bliss. 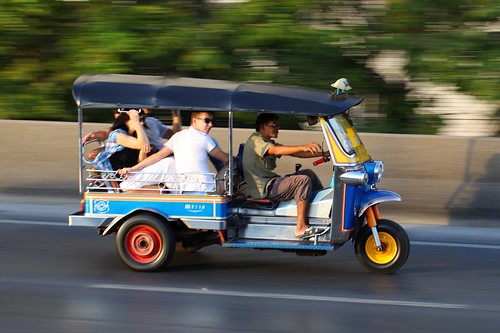 I don't need to think about this one at all; traditional prawn curry in a back street restaurant in Siem Reap, Cambodia. After six months of only Korean food, a good curry was a revelation. Every meal we ate in Cambodia was delightful.

Pizza has never been my favourite meal but after walking the streets of Florence for over four hours, we fell upon a tiny pizzeria. We each ordered a ridiculously expensive slice of pizza and a coke. That was the best piece of ham and mushroom pizza in the world. We all thought so. Pizza must have originated in Italy.

To choose a favourite destination is incredibly difficult as each city, place and sight has its own allure, something remarkable, a different kind of beauty. If I have to choose, I'd have to say Rome is my favourite all-round destination. It is one of the places I most want to visit properly. Two days in this ancient city was certainly not long enough. Besides the obvious attractions (the Colosseum, Pantheon, Trevi Fountain), I want to walk the streets until I can't walk anymore. I want to spend a day on the Spanish steps at the Piazza di Spagna and watch the world go by.

I don't have a least favourite destination. Each and every single place I have been has exceeded my expectations. I think it is because I believe it is the one and only time I'll get there and so, I make the absolute most of it.