Veiled in mystery, Russia is the world’s largest country and the gateway between Europe and Asia.   A land of unique and unfamiliar places, travellers will find themselves surprised by the warmth of Russian culture and the vast array of unforgettable attractions.  Here are our Top 5 Must See Attractions in Russia.

Located northeast of Moscow, this ring of historic cities is like a living museum frozen in time.  Accessible by rail from Moscow, each of the 8 cities boasts unique architecture and gives travellers a taste of Russian culture outside of the major hubs.  Explore the beautiful monastery of Troitse-Sergiev in SergievPosad.  Acknowledged to be the spiritual centre of the Russian Orthodox Church, fascinating metallic onion domes can be seen from outside its massive walled exterior.  Stop at the beautiful city of Vladamir.  Famous for the white walls and golden domes of the Cathedral of Assumption, the city also boasts the Golden Gate – the remains of the wall that used to enclose the city.

Anchored by the magnificent red granite of the Alexander Column, the Palace Square in St. Petersburg is flanked by the Winter Palace and the State Hermitage Museum.  Spend a day perusing collections from the Renaissance or the Dutch Golden Age.  Founded in 1764 by Catherine the Great, it is one of the oldest museums in the world.  Travellers can also explore the Winter Palace where Russian Tsars reigned from 1,500 ornately decorated rooms. 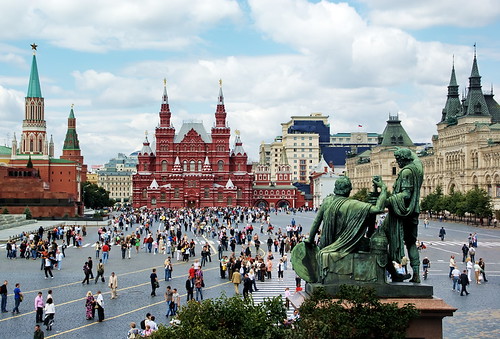 The former summer palace of Peter the Great, its enchanting gardens laden with hundreds of marble statues make this palace a visual feast.  Explore the upper gardens with sparkling Grand Cascade or relax in the French inspired lower gardens. Amazingly, the fountains were all engineered to work without pumps!

Used as an arena for military parades during the Soviet era, Moscow’s Red Square still holds great significance as the site of Lenin’s Mausoleum as well as the colourful onion shaped domes of St. Basil’s Cathedral.  Completed in 1561 by Ivan the Terrible, the Cathedral was built to resemble a bonfire rising into the sky and is one of Europe’s most recognizable buildings.

Arguably Russia’s most important political and historical landmark, the Kremlin is the country’s modern day seat of power and former home to Russian royalty.  The complex itself contains cathedrals, palaces and government offices, some of which are open to the public.  Be sure to check out the armoury and the Diamond Fundwhere you can view all 186 carats of the Orlov Diamond, a gift to the powerful Catherine the Great.

Want to visit the world's largest country, contact us today: