SoKo: Adventure of palate and culture

South Korean food surprises people who visit the country because it is very unique and different to anywhere else in Asia. In my experience, there are very few people who have lived in the country or been there on holiday who do not miss the food.

Footprints Recruiting says that the one thing they hear most from their previous recruits is how much they miss Korean food after leaving and the one thing they hear most of their new teachers say is how much they think Korean food stinks. When I first moved to Korea as an English teacher, I battled to stomach even the smallest portions of the “strange” cuisine. When I left two years later, I wrote a list of the things I’d miss most. Food was high up on the list.

Unfortunately, there are no reliable statistics on how many South Africans make the trip to South Korea each year to take up jobs at government schools and private institutions. The figures must be incredibly high, however. I’m sure fellow travellers to Korea will agree when I say it is almost impossible to explain Korean food to friends and family at home. There is simply nothing to compare it to. Until someone visits SoKo, they will find it hard to understand how food seems to permeate almost every aspect of daily life in that country. Korean cuisine reflects much of the culture, traditions and history; food is more than something to fill the stomach and provides health and medical benefits as well as taste. 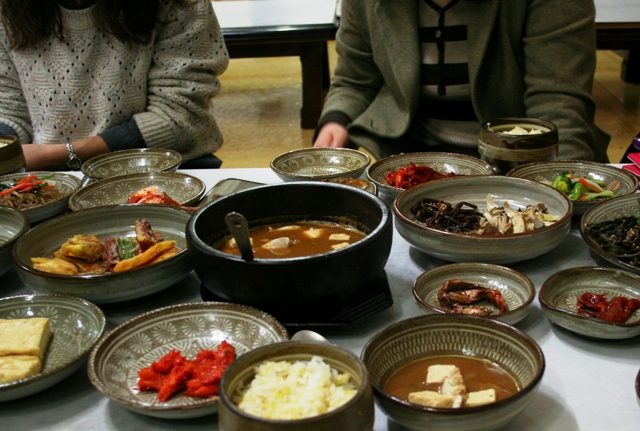 South Korea’s cuisine is generally healthy, varied and spicy. Some would say the food reflects the country’s past and pride in tradition. Rice is a staple with every meal and so is kimchi, South Korea’s national dish. The most well-known (and exported) kimchi is made of fermented cabbage and seasoned with different ingredients. But there are several variations of pickled vegetables such as radish, green onion and cucumber. In late November or early December, families prepare enough kimchi to last the long winter (although these days some families do not have the time or the space to do so). Don’t be surprised if you visit a household sporting a separate refrigerator just to store kimchi.

Galbi (grilled beef meat or ribs), bulgogi (grilled marinated beef) and samgyupsal (thick slices of pork belly meat cooked on a grill) are obvious favourites among Westerners. Bibimbap, a signature Korean dish, is made with a bowl of warm rice topped with sautéed or raw vegetables and chilli pepper paste. Sometimes, an egg and/or slices of meat are added. It is the first traditional dish I ate in Korea and I hated it. Today, sitting elsewhere in the world, I yearn for a bowl of bibimbap. 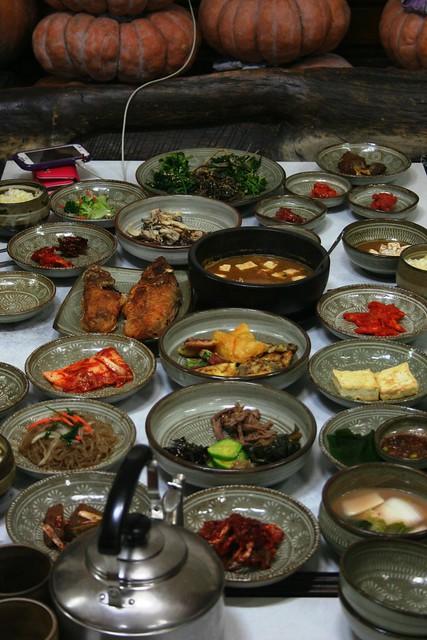 Tteok (rice cakes) are a very important dish on the table for nearly every festive holiday or important event. They are made primarily from white rice flour but ingredients including red beans, nuts and mugwort are often added. I like rice cakes when they are added to a dish or a soup. Tteokbokkie is a popular snack food made with soft rice cake, fish cake and a spicy or sweet red chilli sauce. Then, there’s Korean fried chicken, ramen noodles, seafood pancakes, samgetang (chicken soup made with ginseng), kimbap (Korean “sushi”) and the list goes on.

Even though Korea is officially a Buddhist country, it seems difficult to be a vegetarian. Most often, people will not believe you if you do not want to eat meat. “You’re a vegetarian? Surely not!” What you are able or willing to eat (or what your own definition is) will determine how you find it. For example, eggs are served in many a dish, even if meat isn’t.

The sense of community and “togetherness” really comes through at the dining table. Usually, there is one main dish in the centre and several side dishes to complement it. Most often, everyone has a bowl of rice too. The family or party of friends share from the same dish. Every meal feels like a special occasion.

Even a short while ago, I would not have recommended a tourist visit to South Korea. But since I have left the country and I have seen the extremely positive reactions of family and friends who have visited, I have realized what a profound impact the Republic of Korea had on the way I view the world. For many South Africans, it is a land of intrigue and interesting history. You probably know at least one person or even a few friends over there. Perhaps your son or daughter is teaching there. Why not pay them a visit? The trip will be worth it just for the food!