Sights and Sounds of New York City
As one of the most exciting cities in the world New York has an almost limitless supply of activities to do and sights to see. So it can become quite a challenge deciding what to take in and what to leave out.
Do you pass over a visit to the Empire State Building for a Movie and TV Site tour? Or do you take a leap of faith by opting for the Hell’s Kitchen Pub Crawl over the New York City Freedom Tour? When time is limited you may have to make tough choices so I tried to take in as much as humanly possible, while still walking away with a good taste of the Big Apple.
After all this is the city that never sleeps so why should I indulge in some nocturnal dreaming when I could be out on the streets doing it all?
Armed with my New York City Pass and a Hop-on Hop-off bus ticket I take to the streets.
Top of the Rock
The Rockefeller Center was built just after the 1929 Wall Street crash and provides an exquisite view of Central Park from its observation deck on the 70th floor. On a clear day you will also enjoy a 360 degree, unobstructed view of the entire city and the views are simply spectacular. From the Top of the Rock you can see the Empire State Building, the new World Trade Center precinct, the Brooklyn Bridge and many other iconic New York sites 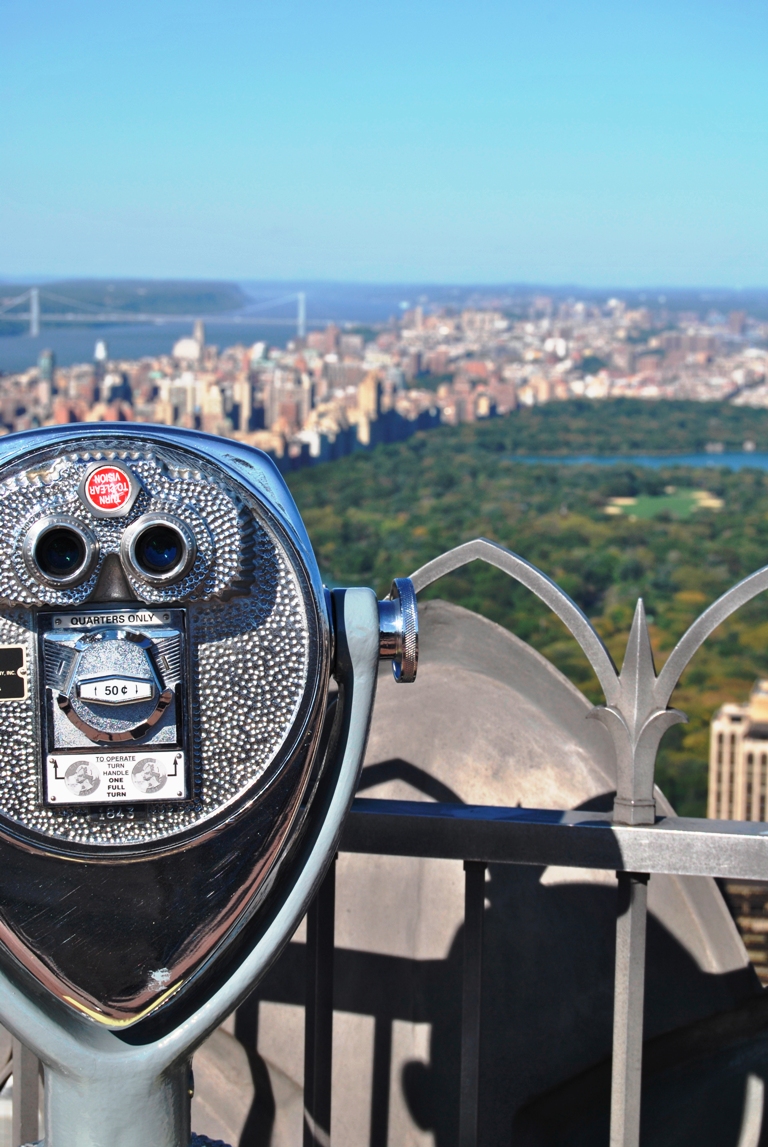 The view of Central Park from the Top of the Rock

Hell’s Kitchen Pub Crawl
Just after sunset I traipse through Times Square. The Square, famous for an assortment of people doing crazy stunts (like the Naked Cowboy), copious amounts of neon lights and the Ball Drop that signals New Year, simmers with excitement. I meet my guide outside the Ripley’s Believe It or Not museum for a quick briefing before departing on foot for a tour through Hell’s Kitchen.
It is said to have received its name as in summer time it is hotter than hell’s kitchen in this part of Manhattan. But it was also home to a New York City’s former underworld where gangsters ruled the city and police feared to tread. We start off at Rudi’s Bar & Grill where the drinks cost but the hot dogs are free (I am serious – you can eat as many New York hot dogs as you like – just pay for your drinks). After Rudi’s we head over to Druids and end our evening at El Azteca, a Mexican pub.
Empire State Building
Having seen the New York vista by day from the Top of the Rock I decide to see the reverse image by night from the Empire State Building. When it opened in 1931 it was the tallest building in the world, standing at 1250 feet. The Art Deco masterpiece is also firmly etched in our collective Hollywood memories. Who can forget King Kong holding onto the object of his affection while swatting at the planes sent to take him down?
The Empire State Building is open for visitors 365 days a year from 8am to 2am (the last elevator leaves at 1:15 am) and provides incredible views of the city by night.
Ground Zero and the NYC Freedom Tour
On September the 11th 2001 a group of Al Qaeda terrorists brought down the Twin Towers in the World Trade Center district, leaving a scar on the Manhattan landscape.
New Yorkers are a tough bunch.  If you have encountered a native New Yorker you will know that you may knock them down but you’ll never knock them out. The building of the new World Trade Center is nearing completion with the tallest building set to reach to a staggering 1776 feet, making it the tallest building in America.
Ten years later I am standing on the exact spot where the north and south towers fell. In their place stands a poignant memorial of loss and rebirth which can be visited on the NYC Freedom Tour by Land and Sea.
My guide insists that we are not standing on a grave site, but rather a memorial to bravery and the American spirit of rebirth. And it is on this positive note that thousands of visitors flock to this site every day who come to pay homage to those brave fire fighters and police men and women who selflessly came to the aid of the people inside these burning buildings. And of course the memorial is there to commemorate the lives of those lost on that day.
Water cascades over the sides of the twin marbled walled reflecting pools that mark the footprints of both towers. The water from which swirls into a second smaller pool in the centre, after which they are then recycled back to the top in a never-ending cycle of renewal. A testament to the memory of those who lost their lives in both attacks (2001 and 1996) and the bravery of the first responders who rushed to the rescue not giving their own safety a second thought.
The two giant pools are embraced by marble walls inscribed with the names of the fallen, and often you will find flowers lovingly placed there.  In the background the new World Trade Center buildings continue to rise each day. 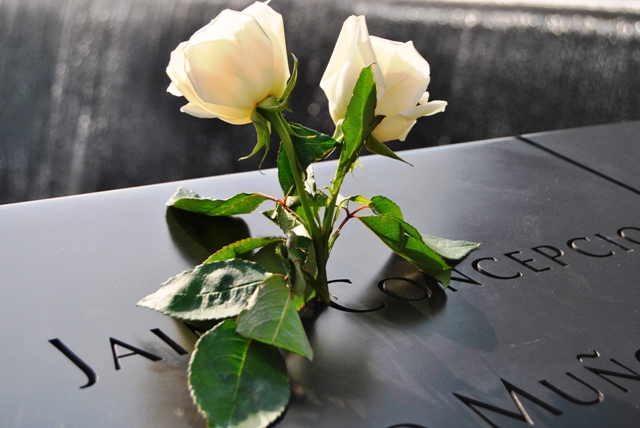 A visit to Ground Zero is only part of your itinerary on the New York City Freedom Tour. You will be able to step back in time on your tour by taking a boat ride to Battery Park, passing Lady Liberty and Ellis Island along the way. You will also take a guided walk past St Paul’s Chapel and the Trinity Church, which served as triage centres during the 9/11 attack. You will also pass Wall Street where, if they are still there, you can see the Occupy Wall Street protesters.
The next boat ride takes you from the South Street Seaport across the bay to cruise under the iconic Brooklyn Bridge, and then it is onwards to the Statue of Liberty and Ellis Island where almost every single immigrant that entered America was processed.
TV and Movie Tour
After all the history and remembrance of the Freedom Tour it’s time to lighten the mood and what better way than to spend some time at the movies? Every year about 250 films and TV shows are filmed in and around New York and this tour is the perfect way to enjoy the lights, camera, and action of the big screen.
Over the next three hours I get to visit the apartment building used to set the location for Friends, I sit on the stairs leading to house that was home to the Huxtables from The Cosby Show.  I saunter past Katz’s Deli where Meg Ryan ‘enjoyed’ her pastrami sandwich in When Harry Met Sally and I stop for a photo opportunity outside the headquarters of The Ghostbusters, which is a real Fire Station called 8 Hook and Ladder 8. 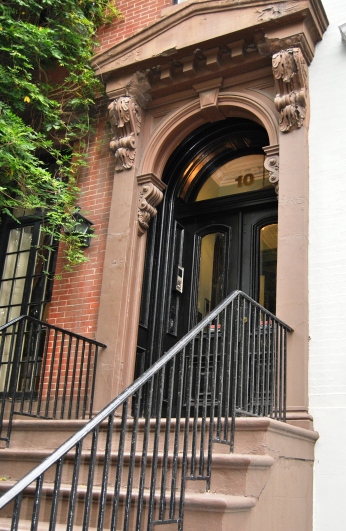 The famous steps leading up to the Cosby home

This is one of the best -value for money tours on offer in New York and it is made all the more interesting by our tour guide, who is herself an actress.  While travelling from place to place Anna shows clips of the movies and TV series filmed in New York to set the scene for the sights visited. And she entertains you with snippets of songs from the movies and trivia questions, which when answered correctly are rewarded with sweeties and treats.
New York City Pass
One of the most inexpensive ways to explore this city is to buy a New York City Pass. An adult’s pass will cost $79 and gives access to Top of the Rock, the Empire State Building, the American Museum of Natural History, the Museum of Modern Art, the Guggenheim Museum, Circle Line Cruise, Statue of Liberty and Ellis Island. It represents excellent value for money and a skip the queue opportunity to get inside the attractions much faster.
Moving around
The Gray Line Hop-on Hop-off tour busses are an excellent means of orienting yourself in New York. A 48-hour All Loops bus pass allows unlimited stops across uptown and downtown Manhattan including Brooklyn, Harlem and a night tour to admire the city lights.