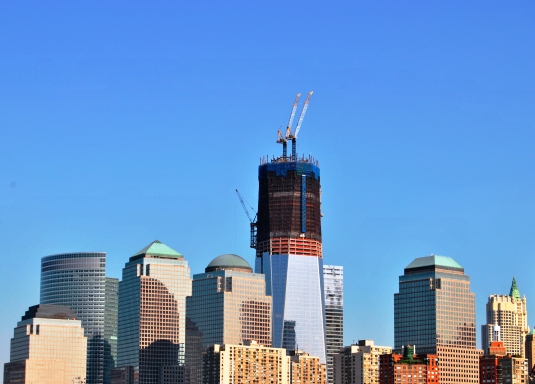 Flag of Honour at the WTC memorial site

On September the 11th 2001 a group of Al Qaeda terrorists brought down the Twin Towers in the World Trade Center district, leaving a scar on the Manhattan landscape.

Ten years later I am standing on the exact spot where the north and south towers fell. In their place stands a poignant memorial of loss and rebirth which can be visited on the NYC Freedom Tour by Land and Sea.

My guide insists that we are not standing on a grave site, but rather a memorial to bravery and the American spirit of rebirth. And it is on this positive note that thousands of visitors flock to this site every day who come to pay homage to those brave fire fighters and police men and women who selflessly came to the aid of the people inside these burning buildings. And of course the memorial is there to commemorate the lives of those lost on that day. 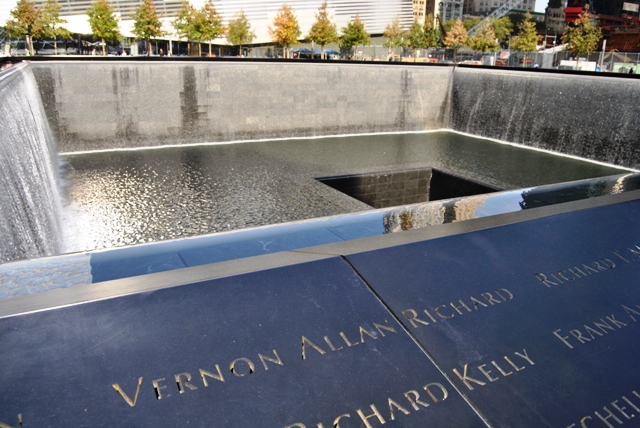 Water cascades over the sides of the twin marbled walled reflecting pools that mark the footprints of both towers. The water from which swirls into a second smaller pool in the centre, after which they are then recycled back to the top in a never-ending cycle of renewal. A testament to the memory of those who lost their lives in both attacks (2001 and 1996) and the bravery of the first responders who rushed to the rescue not giving their own safety a second thought. The two giant pools are embraced by marble walls inscribed with the names of the fallen, and often you will find flowers lovingly placed there.  In the background the new World Trade Center buildings continue to rise each day.

A visit to Ground Zero is only part of your itinerary on the New York City Freedom Tour. You will be able to step back in time on your tour by taking a boat ride to Battery Park, passing Lady Liberty and Ellis Island along the way. You will also take a guided walk past St Paul’s Chapel and the Trinity Church, which served as triage centres during the 9/11 attack. You will also pass Wall Street where, if they are still there, you can see the Occupy Wall Street protesters. 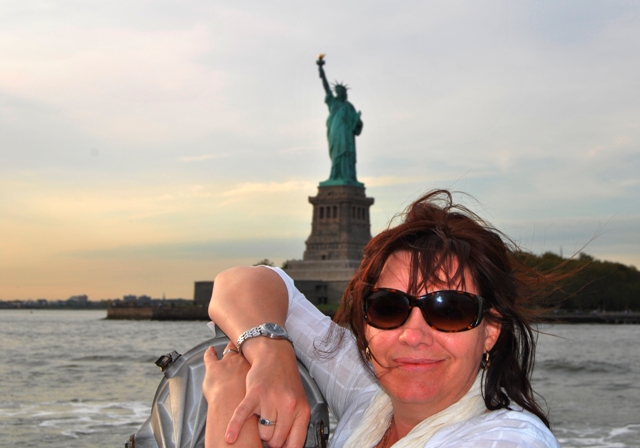 Me with Lady Liberty in the background

The next boat ride takes you from the South Street Seaport across the bay to cruise under the iconic Brooklyn Bridge, and then it is onwards to the Statue of Liberty and Ellis Island where almost every single immigrant that entered America was processed. This little tree was the only living thing to survive when the towers crashed down. It was nursed back to health and now forms a living memorial to the WTC disaster

After all the history and remembrance of the Freedom Tour it’s time to lighten the mood and what better way than to spend some time at the movies? Every year about 250 films and TV shows are filmed in and around New York and this tour is the perfect way to enjoy the lights, camera, and action of the big screen. Over the next three hours I get to visit the apartment building used to set the location for Friends, I sit on the stairs leading to house that was home to the Huxtables from The Cosby Show.  I saunter past Katz’s Deli where Meg Ryan ‘enjoyed’ her pastrami sandwich in When Harry Met Sally and I stop for a photo opportunity outside the headquarters of The Ghostbusters, which is a real Fire Station called 8 Hook and Ladder 8.

This is one of the best -value for money tours on offer in New York and it is made all the more interesting by our tour guide, who is herself an actress.  While travelling from place to place Anna shows clips of the movies and TV series filmed in New York to set the scene for the sights visited. And she entertains you with snippets of songs from the movies and trivia questions, which when answered correctly are rewarded with sweeties and treats. 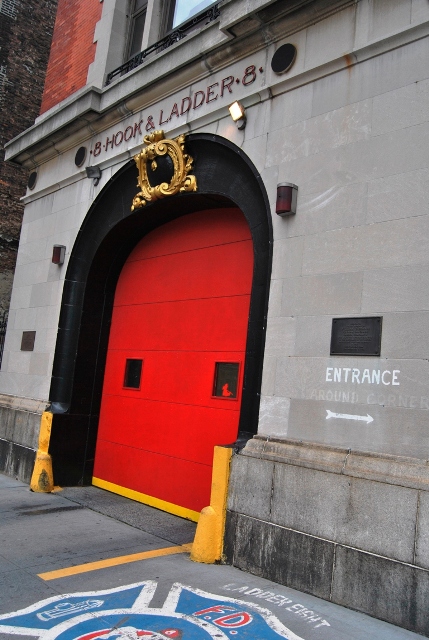 One of the most inexpensive ways to explore this city is to buy a New York City Pass. An adult’s pass will cost $79 and gives access to Top of the Rock, the Empire State Building, the American Museum of Natural History, the Museum of Modern Art, the Guggenheim Museum, Circle Line Cruise, Statue of Liberty and Ellis Island. It represents excellent value for money and a skip the queue opportunity to get inside the attractions much faster.

The Gray Line Hop-on Hop-off tour busses are an excellent means of orienting yourself in New York. A 48-hour All Loops bus pass allows unlimited stops across uptown and downtown Manhattan including Brooklyn, Harlem and a night tour to admire the city lights.

I travelled to New York courtesy of Qatar Airways and Flight Centre.

Priced from R3990 per person sharing enjoy a three night stay in four star luxury at the Grand Hyatt New York, a New York TV and Movie sites tour, travel bag and return transfers. Flights on Qatar Airways start from R9390 on specific dates. This New York package is available on selected dates from 1 November to 28 February 2012 and a high season surcharge may apply. Contact Flight Centre on 0860 400 747 and quote PRS92128 to book this package. Visit www.flightcentre.co.za for more details.

Pricing for side trips which you can book through Flight Centre (0860 40 0747 or www.flightcentre.co.za) is below. Flight Centre has over 140 side trips and tours that travellers can indulge in when in New York. These are some of the tours that I experienced: