IS this the face of the world’s oldest backpacker?

Keith Wright, a 95-year-old World War II veteran from Burleigh Heads, is about to take off on his eighth trip to Europe, where he plans to stay in hostels and join other nomads on a hop-on hop-off independent rail journey across the continent.

The no-frills traveller, born and raised in Shepparton, has been flying solo around the world since 2002 and has ticked off most countries in Western and Eastern Europe during the past decade.

Keith, who is as sharp as a tack, travels in economy class on a round-the-world ticket and chooses to check-in to hostels, where he sleeps in a single room where possible, but occasionally shares a dormitory with 18 to 30-somethings.

His first solo trip was at the age of 85, a few years after his wife Barbara passed away, and was a four-day bus loop through Turkey.

“I have had itchy feet all my life and had always wanted to go to Gallipoli on Anzac Day, so I decided to sell our house and put the extra money towards a holiday,” recalls Keith, who has no plans to stop travelling anytime soon.

“My belief is that if you are fit and able to travel independently, it is the best way to see as much as of the world as you want.”

These days, the spritely pensioner lives on a shoestring all year to save enough money to get abroad and has created a personal travel budget.

On May 28, he heads back to Madrid, San Sebastian, Paris, Munich and Vienna for a two-month holiday, with a special side trip to London to see his favourite Aussie horse, Black Caviar, race at Royal Ascot.

His enthusiasm for travel may be attributed to his days working for Ansett Airways and Pioneer Coach Travel, where he held roles in payroll and operations.

Even at his ripe age, Keith loves to have a beer with fellow travellers and is not afraid to navigate the less beaten paths alone, by foot, road or rail.

“I have seen things that most tourists haven’t seen, because I walk the back streets and take trains or buses to nearby towns for the day,” he said.

“Most people I meet are surprised when I tell them my age and amazed that I have come all the way from Australia.

“Wherever I go, I wear my Australia cap, so it gets me a lot of attention from the locals.”

Keith puts faith in the consultants at Flight Centre and Escape Travel in Burleigh Heads, who arrange his adventures, from getting him a seat on his preferred flights to securing his admission for this year’s Royal Ascot Races.

To make this trip more memorable for Keith, Flight Centre and Escape Travel have paid to upgrade his Emirates flights to business class, so he can stretch out in style enroute to Europe.

Flight Centre’s travel consultant and airfare specialist, Christina Kerr, has booked a good part of Keith’s holidays since he first visited her store in 2002.

“Every booking I have made for him has been an inspiration to me,” Christina said.

“I like to tell his story to other travellers, particularly those who may have thought themselves too old to travel overseas or feared that it was too expensive.

“Keith has become more like a friend over the years and when he travels he even asks the staff of the hostel to send me an email, just to let me know that he has arrived safely.” 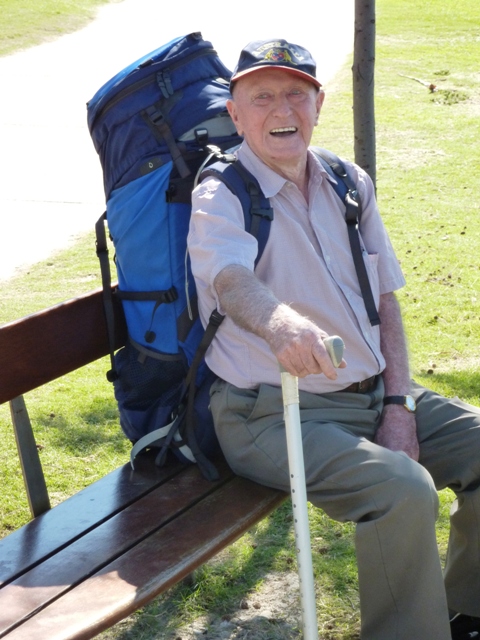 Is this the wold's oldest backpacker?