Mauritius - More than what Meets the Eye

Everyone looks for something different in a holiday. Some want constant activity, others want absolute rest. Some search for adventure and others want to find the party. Ideally, some of us would like a little of all those things. And Mauritius can certainly offer these and more with its hotels on white sand beaches against the background of volcanic mountains, water sports, Indian temples, colonial houses and beautiful botanical gardens; just a few of the reasons why it is one of the most popular year-round tourist destinations in the region.

In my first few years of high school, I was taught by an incredible French teacher. She gave me love for a language that was so far removed from my immediate life;she regaled us with stories of French cuisine and everyday life. To this day, I don’t know if she had even been to France. Even after I had moved on to boarding school, I kept in touch with her and the class. When they planned a French school trip, I was lucky to be included in the group.

After much borrowing and persuading, I managed to find the resources to join the small expedition of matric learners to Mauritius. It would be my first trip over the seas. And it would be where the travel bug bit for the very first time. The trip encouraged me to learn more about other countries and cultures, to explore other languages and to, well, converse in French. The island of Mauritius is more than just beautiful beaches, luxury resorts and water sports; it is a country where there are rich and poor, where children go to school and the political scene is rather‘interesting’, where there is a fascinating fusion of cultures and the only place where the extinct dodo bird used to live.

What was especially great about the school French trip to Mauritius was the fact that we experienced it the local way. It was an affordable trip because we stayed with host families and ate at home (and cheaply) most days.As well as soaking up the sun rays on some of the most beautiful beaches in the world, we visited schools and centres and played with the children there. We sung the South African National Anthem for them. We learnt a little Creole language and we practiced our formal French. We walked the streets and visited houses on the beach. My French teacher was a very clever woman, you see. We hadn’t been to France but she had shown us a lot of a society which speaks French as an official language. 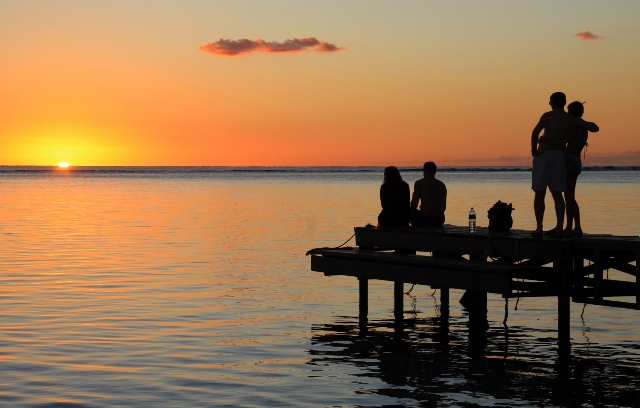 For me, travelling is such a gift. It’s about exploring a new place, not just the scenery or the tourist attractions but the lives of the local people, their traditions and culture.  Often, people travel to a destination, get picked up at the airport, taken to their accommodation, never leave their accommodation and head back to the airport at the end of their stay. They haven’t really seen much of the place, have they? And it’s perfectly fine. But I would urge you to leave the confines of your resort once or twice.

Unless you’re on honeymoon in Mauritius, in which case you are half forgiven, try to see a little bit of local life as well as lazing in luxury. Learn about the unique natural history, go fishing, visit a sugar mill, do a spot of diving or play a little golf (if you are so inclined) and drink a little (or a lot) of the local rums. But most importantly, meet the people. After all, the people are what make a place really worth visiting and going back to.