It’s 11am on Saturday. Dark, ominous clouds are rolling in. It may as well be night. In the rugby village, everyone is reclining on comfortable bean bags in front of the big screen, awaiting the inevitable. But there has been great weather all week? My friends and I leave it until the clouds open to find cover, which is very limited. Undeterred, we grab ponchos off the lovely man handing them out and head back into the open once the rain has subsided somewhat. After all, it’s Sevens weekend! 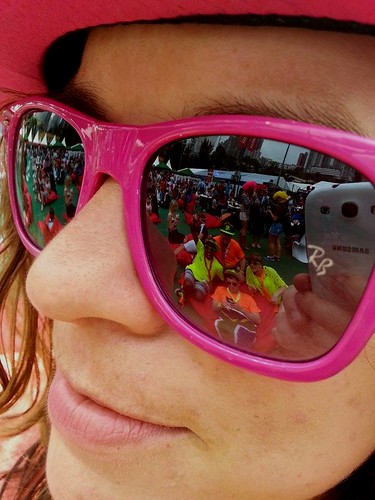 Hong Kong Rugby Sevens is Asia’s biggest sporting event and the weekend that Hong Kong really lets its hair down. The Hong Kong leg of the series draws a truly international crowd with fans travelling from all over the world to support their teams in the 40,000 capacity stadium.Tickets in the public ballot for this year’s event were 12 times over-subscribed; hence we are in the rugby village next to the stadium, close enough to hear every cheer and public announcement. But the mood is just as exuberant here. Children are dancing and cameras clicking.

For those who cannot make it into the stadium, as well as the rugby village, people can head to the fan zone overlooking Victoria harbor which boasts live bands, coverage of all the games, food, drink and even games for the kiddies. The bars in neighbouring Wan Chai also come to the party by showing the games live and offering some great cut-price deals. 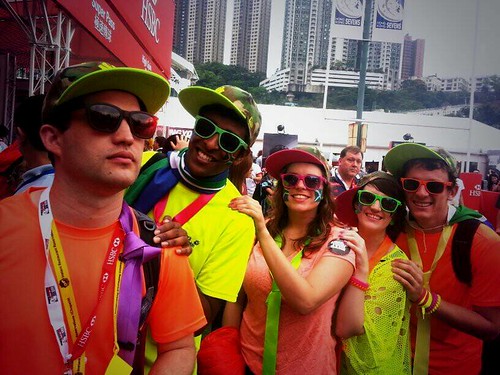 Rained upon and still smiling
Image courtesy of Jack Beaumont

For the hard-core fans of the sport, the rugby is first-class. It seems that much of the crowd turns up for the electric atmosphere and indulgent drinking, however. The South Stand is home to the most boisterous supporters;the singing, Mexican waves and war cries generally start here. South Stand is also home to the tournament’s most dedicated drinkers and most creative dress-up inventions, as my friends and I are fortunate enough to witness first hand in the stadium on the Sunday.One sees anything from bananas to a deck of cards to the Smurf family in the crowd. It’s a sea of clashing colours.

The 2014 tournament’s proceedings have hardly been affected by the rain. Those who are well-prepared pull out their waterproof ponchos and umbrellas. Others simply drink enough not to notice. The Kiwi team even ends their fantastic tournament run with a rather impressive shirtless Haka performance which has since gone video viral in countries all over the world. 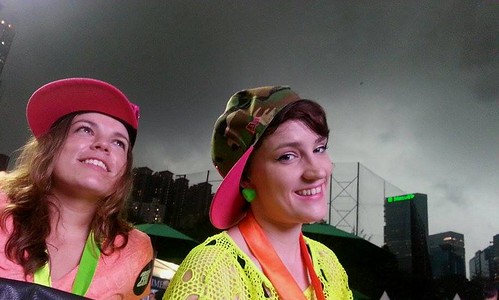 Attendance, or presence should I say, at the Hong Kong Rugby Sevens is highly, recommended, whether you are a rugby fan or not, whether you can get into the stadium or not. It’s Hong Kong’s ‘Mardi Gras’ of the year and there is such fun to be had.

Romantic getaway fun in Zanzibar
21 December 2016
One of the best things about a romantic getaway is being able to completely escape the stresses that come with everyday life, and instead just focus
Destinations

Travel in Mauritius: A guide for first-timers
28 December 2016
Mauritius is a glorious destination with a rich history, spectacular coastline and an incredible natural beauty – you’re going to want to explore
Travel News