I recently started to read Jonathan Chamberlain’s rather fascinating book called “King Hui: The Man Who Owned All the Opium in Hong Kong”. Besides the obvious intrigue of opium, it was the foreword that really started to make me think about Hong Kong, its complicated history and how little I really know about this fascinating city. David Tang writes about the book: “This is an intimate history of this city. We catch rare glimpses of ordinary lives in the streets of Hong Kong. We are soaked in the attitudes and behavior of the local Chinese people whose lives would otherwise have remained hidden from our gaze.”

These days, I would say that Hong Kong’s food culture, which is intricately related to its history, can give us a little insight into the society here. As you walk down the street in Hong Kong, you pass street eateries and Chinese cafes with traditional Cantonese cuisine, bakeries and upscale European and south-east Asian restaurants and, naturally,a McDonald’s on every corner. Hong Kong cuisine has long been influenced by Cantonese cooking, the Western World, Japan and south-east Asia. It is influenced by just about everywhere, hence the nickname of ‘Gourmet Paradise’.What is particularly interesting, however, is that, in some ways, “Hong Kong’s food culture has actually reflected the economic, social and livelihood changes that Hong Kong has undergone over the past hundred and more years”(heritagemuseum.gov.hk). 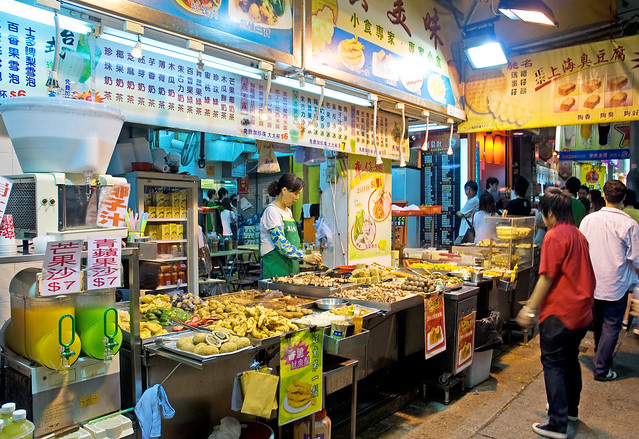 Hong Kong, which began as a small island located off the coast of southern China, has experienced a checkered past, what with Chinese imperialist rule until the early 1900s, British colonisation and the Japanese occupation. In 1997, Britain handed control of the city to China. Today, Hong Kong is an important, international city of commerce; hugely diverse, very densely populatedand forever awake. Although Hong Kong’s demographics reflect a majority of Chinese people, since moving here, I have met teachers, domestic helpers, business people and students from all over the world; from Zimbabwe to France, America to New Zealand and Pakistan to the Philippines.

Residents work hard here and often, they work very long hours. Not many have the time (or even the space) to cook at home. Dining out and take away options are both incredibly popular. You can find whatever you want at nearly any time of the day or night; eastern, western flavours or a fusion of both. Roast duck, fresh seafood, Chinese barbecue and dimsum (buns or dumplings filled with meat, seafood or sometimes chicken feet) are some of the favourites among locals and foreigners alike. For those with a sweet tooth, egg tarts, pineapple bread and Hong Kong style milk tea can be found on every corner.There are traditional tea-houses and street-side restaurants. And there are high-end restaurants catering to international tastes. Some say Hong Kong is worth the visit just for the culinary experience.

Heritagemuseum.gov.hk says that “the success or otherwise of restaurants, the popularity of cuisines and the change of taste have not only marked thedifferent expectations of food and drinks at different times, but have also become a collective memory of Hong Kong people.” So, if you visit Hong Kong, be sure to experience a little of this memory, reflect on the history and soak in the attitudes and lifestyle of the people who live here.