Germany is famous for many things, from Bavarian beers to high-end auto-mobiles and how can we forget the invention of the ever-favourite hamburger.  However, what many don’t realise is that Germany is also home to some of the coolest castles in all of Europe.   So, the next time you’re touring through Europe or at port on a Baltic cruise, be sure to check out some of these amazing abodes.

Hohenzollern Castle.  Located in the southern state of Baden Württemberg just 50 kilometres from Stuttgart, this stunning castle is perched on top of a mountain and has origins dating back to the 11th century.  While the first two original castles were destroyed by war, the Prussian crown Prince William ordered it be rebuilt for a third time in 1850.  Designed by Berlin architect Friedrich Stüler, famed for his neo-Gothic style, the castle with its many towers and fortifications and walled courtyard was finished in 1867.  You can do a complete tour of one of the country’s most famous castles for €10.00 per person. 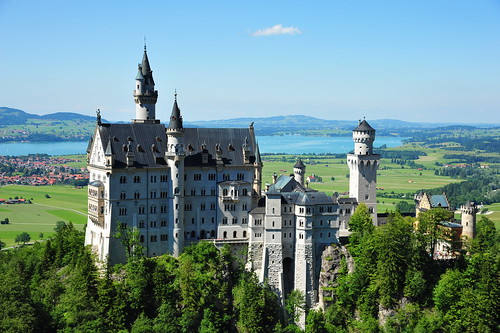 Neuschwanstein Castle.  Set against the stunning backdrop of Bavaria near the picturesque town of Füssen, this castle is so beautiful it even became the inspiration for the Disney Cinderella Castle.   For the regions crown Prince Ludwig II, Neuschwantstein was intended to be his private refuge.  Initial construction began in 1868 with an ambitious plan of over 200 rooms including a lavish throne room, several turrets and even a 3 storey balcony to be completed by 1872.  By the time of Ludwig’s death in 1886, the palace remained unfinished.  Today visitors can tour Neuschwanstein and nearby Hohenschwangau Castle for €23.00 per person.  See the King’s bedroom, throne room and even take photos of the surrounding valley from the incredible balcony.

Schwerin Castle.  Arguably one of Europe’s oldest castles, first reports of Schwerin were made as early as the 10th century.  Located on an island surrounded by the crystal waters of Lake Schwerin in the northern state of Mecklenburg – Vorpommern, this castle is truly a fairy-tale fortress.  Complete with a baroque garden, many towers and over 600 rooms, for centuries it was home to the dukes and duchesses of Mecklenbug, most notably its restorer Friedrich Franz II.  Today it is the seat of the state parliament.  This magnificently ornate castle features a throne room complete with Carrara marble pillars and guilded iron doors as well as a tower room offering stunning views of the lake.  Easily accessible from the popular cruise port Warnemunde, visitors can see the castle and its meticulously manicured  grounds for only €6.00 per person.

Write on our wall on Facebook.com/FlightCentreRSA