Expect the unexpected in Namibia

It’s not that I’ve got anything against Frenchmen (I was once proposed to on a moonlit beach in Cannes by a Foreign Legionnaire who had one blue eye and one brown eye), but I’m a stickler for time.

There I am, with my best friend, Sylvia, also a travel writer, zipping up and down the dunes on quad bikes about 60km in from the Atlantic in north-west Namibia. We are two hours out from our remote camp that lies among ancient albida trees beside the ever-flowing Kunene River, not far from the Angolan border. 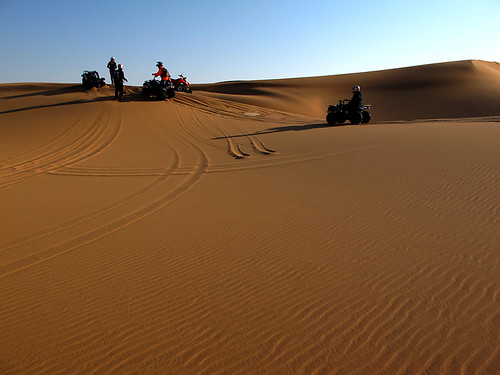 We’ve really got the hang of this, revving up dunes and gently coasting down the opposite side. The sun is hot, there isn’t a drop of moisture in the pristine air, but it hits the lungs like champagne, and hell, this is fun! 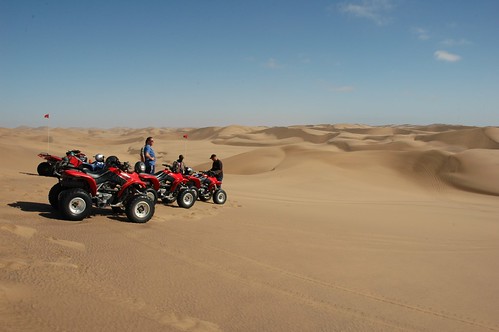 Just Pierre and his wife, Claudette, Sylvia and I, and our two guides, one very experienced, one on his first day out. I’m just soaking myself in the vastness, tranquillity, awesome landscape and otherness of it all when a “Merde!” pierces the desert air. It seems that Pierre has just remembered he has a plane to catch and should be back in camp immediately. The Gauls disappear into the horizon at a rate of knots, led by Guide #1. We wish him a cheery Bon Voyage, tut, tut, at his Gallic insouciance and continue with our zipping up and down. 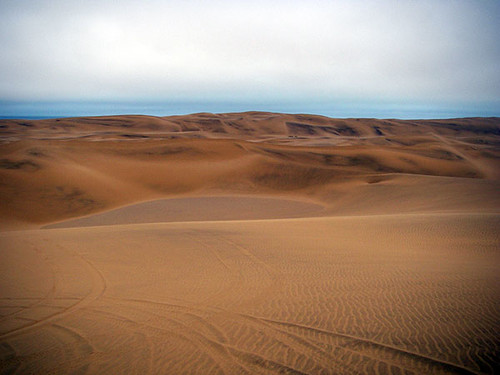 The sea visible in the distance. Photo by mercedesbbk.

The sun gets hotter. The air gets drier. Time passes. The prospect of a cold beer instead of brackish water from our water bottles becomes more and more appealing. We’ve glimpsed the ocean from afar and now it’s back to camp. Toad of Toad Hall with his little red car has got nothing on us. Poop! Poop! Some more time passes.

After another hour or so of sand-blasting, I notice the same little salt bush that I zipped past half an hour ago. Undaunted, we plough on – and begin to recognize our own tracks, but can’t find anybody else’s. We’re lost – lost in the Namib Desert amidst the highest dunes in the world.

There’s only one thing for it – rev like mad (I have a numb thumb and bum by this time) and go as fast as possible up to the top of the nearest dune. Maybe we can see something from up there. The nearest dune isn’t quite the north face of the Eiger, but it is very high and pretty intimidating. Problem is you have to go really fast to get to the top, and it’s only then that you realise you don’t know what’s on the other side – on the south slope. Sylvia and I fly, like Thelma and Louise, not into the Grand Canyon, but into space.

“Sit straight and hang on!” shouts Guide #2, wondering what his fate will be when it transpires he’s lost two journalists in the middle of the world’s oldest desert.

“Whee-e-e-e-e!” shouts Sylvia in mid-air, as we fly in perfect tandem through space, “What other grannies would be doing this?” 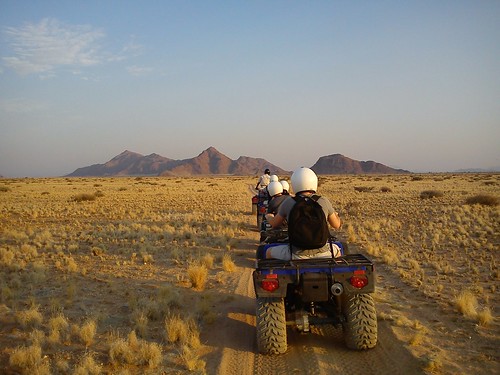 Beautiful landscapes in the Namibian desert. Photo by mallix.

Several hours and several glasses of Rehydrate later, rescued from our bone-bleaching fate by Guide #1 who has got rid of the Gauls and has now come back to find us, we’re back at camp, sitting on a tree-shaded deck overlooking the burbling river, half-heartedly listening for the Cinderella waxbill (the regional mega-tick) and reliving one of our best travel experiences ever. 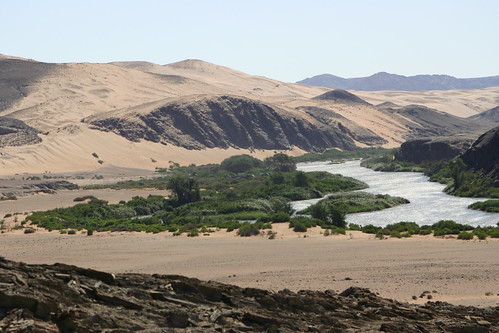 Seven hours of quad biking in unknown territory is quite a notch in the old belt.

Namibia is always full of the unexpected. It’s a must on any serious traveller’s wish list. When you visit you’ll discover why.

Find holiday packages to Namibia from only R6,190.00 here.