Discover the Fascinating Attractions at the Cradle of Humankind

Learning about the origins of this world is incredibly fascinating and invigorating. If you are looking for the opportunity to embark on an educational breakaway that is truly fulfilling and uplifting, the Cradle of Humankind is the perfect destination. The site is located mostly in Gauteng province with a small portion crossing over to North West Province. 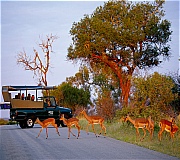 The debate that centres on the existence of the human being has been going on since the beginning of life. Some scientists will try to persuade you of evolution whilst others rely on adaptation. Others will tell you not to overanalyse the subject and to just believe that we were made of dust and that the woman was formed from Adam’s rib. These theories tend to ignite a discussion whenever mentioned.

Every person is entitled to their own opinion and you are free to believe whatever they wish. Whether you are one who feels strongly about the subject or whether you just go with the flow, you probably all love the idea of seeing where we came from.

The Cradle of Humankind was declared a world heritage site in 1999 and is comprised of 47 000 hectares of land filled with fascinating features. There are hundreds of extraordinary attractions that will leave you tantalized and utterly captivated. The site consists of the Fossil Hominid Sites of Sterkfontein, Swartkrans, Kromdraai and the environs.

There is a strip of about a dozen dolomitic limestone caves each containing various fossilised remains of ancient animals, plant and more importantly of hominids. The remains that have made this site so incredibly celebrated and which sprung about its high reputation is the discovery of the Australopithecus africanus. These are generally thought to be the hominids which are upright walking apes, or some family closely related. They are regarded as being our human ancestors.

Seven out of the twelve sites at the Cradle of Humankind have produced hominid remains; in fact all together there have been a discovery of approximately 850 fossilised remains. To this day this is the only location on earth which has produced so many related remains and is therefore highly regarded in the scientific circles.

Through a complicated chemical processes it has been determined that the caves in which these remains were found are estimated to be around 2.3 billion years old. This being said it is also estimate that the spit from ape to huminidae took place somewhere between 5 and 6 million years ago.

Flight Centre has an incredible team of dedicated consultants who have ample experience in constructing an unbelievable getaway. For more information on what to expect from this out of this world destination contact us today.