Who would have thought, those of us who remember the history of the late Seventies anyway, that Cambodia would one day become a fascinating travel destination?

But don’t let the terrible spectre of Pol Pot and his evil regime, which killed over 2-million innocent people, keep you away from this beautiful country and its gentle people. Times change and history moves on …

Cambodia must be on any serious traveller’s wish list, if only to visit one of the most inspired religious monuments ever built – the 1 200-year-old Angkor complex of temples spreading over an area of 400 square kilometres, only rediscovered in 1861. 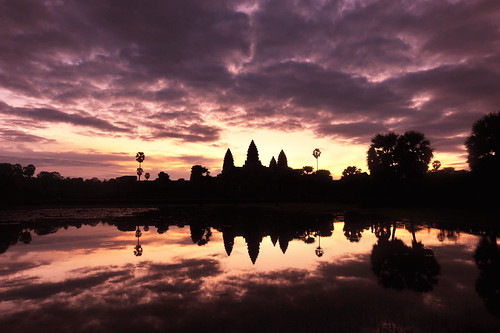 The buildings glorify the unrivalled legacy of a powerful Khmer race, and their beauty, symmetry and mystery almost defy description. Angkor Wat, a representation of Hindu cosmology and often described as the Eighth Wonder of the World, is one of the greatest archaeological and architectural sites you’ll ever visit. 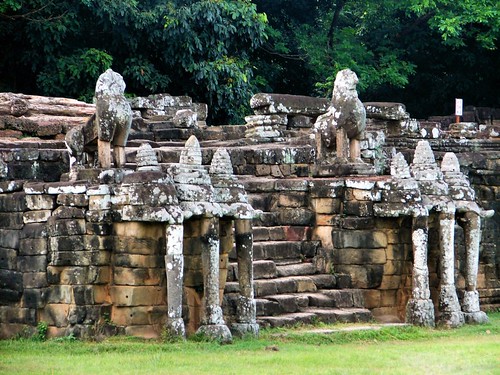 The Elephant Terrace at Angkor Thom. Photo by Jenny Levine.

Wander at will among 40 000 stone elephants carved in exquisite bas-relief by 6 000 sculptors; gaze at the 37 different hairstyles, representing the 37 levels of heaven, which adorn the goddesses; marvel at the chiselled grace of the supple absara – the celestial temple dancers – as you step past a Buddhist monk on one of the causeways. He is dressed as such monks have traditionally dressed for thousands of years – in saffron robes, tonsured and sandalled – except this one is chatting on a cellphone. 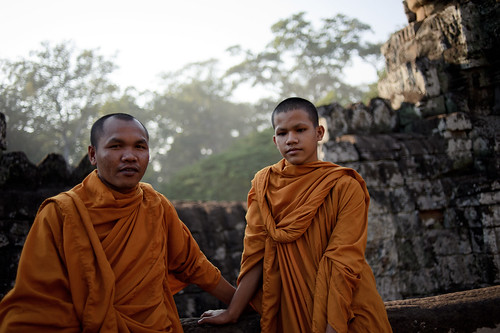 Thunder rumbles through long, dark, stone galleries lined with carved legends of the monarchy, as mynahs strut on the emerald-green grass outside. Some carvings, like the trunk of one particular elephant, are worn smooth over the centuries by the touching of devoted hands. I observe that although the ancient sculptors recognise the inherent sexuality of humans and gods, and often celebrate it, they paradoxically express it as sensitive and somehow chaste – among the thousands of carved figures there is not one unclothed one.

Clouds of swifts wheel around the topless towers as I climb the precipitous steps to “Paradise”, where an orange-bedecked, flower-garlanded figure of Buddha sits, tended by an aged crone smoking a pipe. The way is high, steep and narrow. “Remember, it’s a hard journey to Paradise!” quips a bespectacled monk skipping lightly down past me. 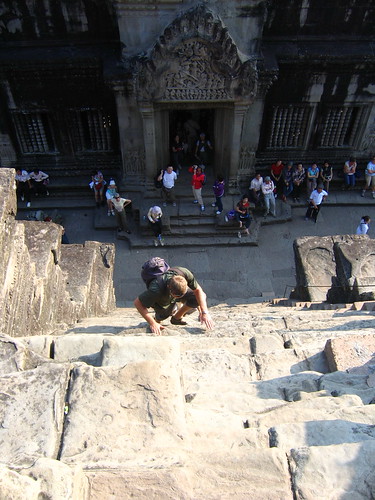 There’s an intimate, benevolent atmosphere in the Angkor Thom complex. Pale yellow butterflies, a whispering breeze, play around the huge, carved smiling faces that look down at you from every direction. Their smiles seem full of peace and contentment. The surrounding greenery dazzles against the centuries-old grey stone. 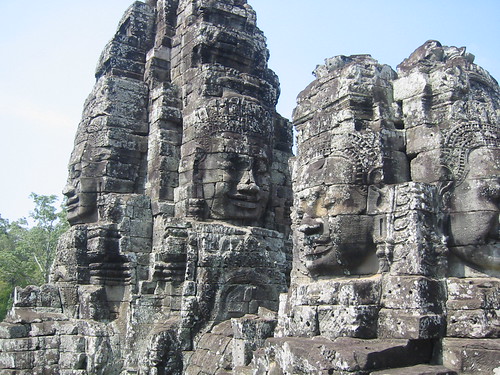 But the jungle lies in wait patiently, crouching around the perimeter. “The rule of the trees comes here,” says Kim, our guide, in the Ta Prohm complex. Giant roots invade walls, tree trunks push through massive stones, branches invade towers, bright green plants sprout and shoot between the grey stone blocks, as red and green parrots fly chattering to and fro among vaulted roofs open to the sky.

In this mystical, atmospheric place it’s impossible not to contemplate human hubris and Ozymandias. However, my philosophical reverie is interrupted by Kim: “Indiana Jones was filmed here.” 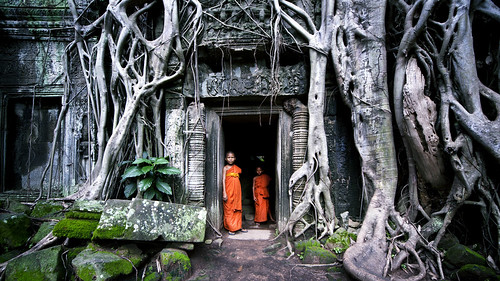 The Siem Reap market and the Russian Market in Phnom Penh are treasure troves. You can spend hours fossicking here and can discover – if you look hard enough – amazing finds such as antique Chinese beads from the Warring States period of 1st and 4th centuries BC, perhaps an amethyst ring purported to have come from Angkor, contemporary ruby and sapphire necklaces and earrings (extremely reasonably priced), old and new lacquer boxes, as well as temple rubbings, precious stones, marble carvings, silks, bas-reliefs and beautifully handcrafted items of gold, brass, copper and silver.

To keep your strength and your shopping spirits up, be sure to sample delicious Cambodian food, similar to Thai cuisine (without the fiery chillies), always freshly cooked and cheap. At a corner café in the market, I had a seven-course meal with a local beer that set me back US$4. 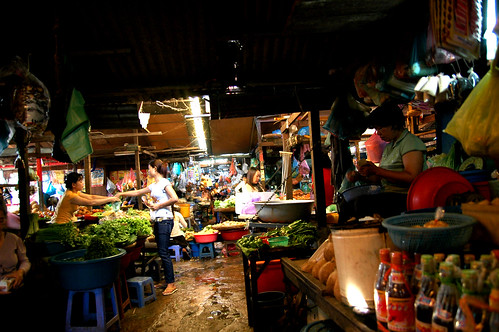 The Russian market in Phnom Penn. Photo by Shin K.

As we drive from the little town of Siem Riep, nestled between rice paddies and the Siem Riep River alongside the Angkor complex, to Tonle Sap, Cambodia’s (and south-east Asia’s) largest freshwater lake, Kim tells me that many Cambodians raise crocodiles to make the family fortune. You build a cement pen in your backyard, buy a baby croc from one of the many waterside villages, feed it on dead fish once a week until it’s seven years old, and then sell it for US$1 500.

Kim himself can’t keep one, because he was born in the Year of the Dog and it would be tempting very bad luck on himself and his family to rear one. “Crocodiles eat dogs and my best loved ones could die. My brother is OK. He is Year of the Tiger and tigers eat crocodiles.”

In Tonle Sap I board a small boat, and after getting stuck on a few sandbanks, enter into and through yet another world: the world of the floating villages. About 9 000 people – mostly Vietnamese – live in the six floating villages on the lake. All sizes and shapes of houses, some with corrugated iron roofs, some thatched with palm fronds, rock gently to and fro, softly up and down in the water. 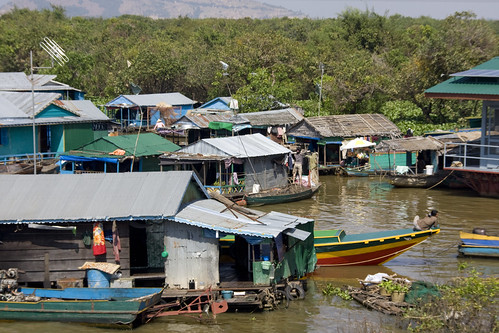 Children play around the houses as they paddle in large plastic bowls from one boat to another. Although the water is brown and muddy, there is clean washing strung up on lines to dry. A floating shop, laden with everything from washing powder and cooking oil, to fabrics and shoes, plies between the houses as babies swing in hammocks and women cook delicious-smelling food that spices the still air. 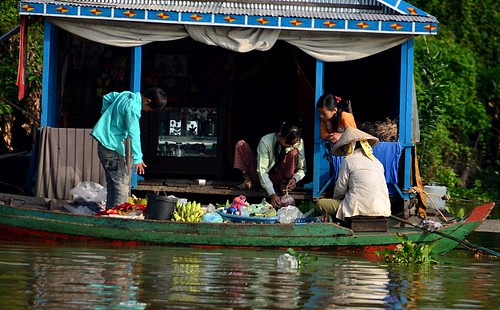 Many of the floating houses have “gardens” on their roofs or in containers, some with flowers, most with herbs and vegetables. One boat has a TV aerial, another has some large black pigs sunning themselves on its roof. Fish jump. Wooden canoes laden with logs paddle by, and I see mounds of shrimp laid out on decks to dry in the sun. 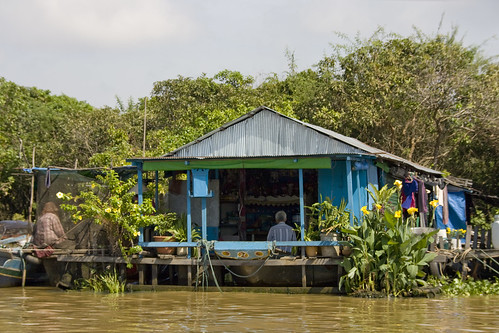 The boat interiors are spotless, each miniscule area well demarcated – sleeping, cooking, socialising. Whole families share tiny boats – but the atmosphere is of serenity and peace. Birds twitter, soft voices call over the water, boat engines sputter, women laugh, and the steady rhythm of hammers as new houses are built add to the unique soundtrack. The open water stretches seemingly unendingly to every horizon.

As a canoe collecting cans for recycling glides by with a cheery wave from its paddler, I realise that in my time in Cambodia, I have seen no acrimony, witnessed no agro, heard not a voice raised in anger, nor seen a scowl. There is calm, gentleness and acceptance. There’s no telling how long that will last when mega-tourism discovers Cambodia.